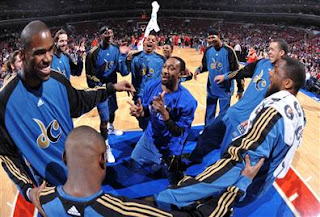 It's about 65 degrees below zero outside. The thermostat might say about 30 but it feels much colder. I am not equipped for this. This is not Minnesota this New Orleans and some folks don’t even own a heavy jacket. In true local form it's a perfect excuse to get a drink to 'warm you up a little'. Mr. Roy and his crew stood in front the green store on Forstall Street and St. Claude Avenue in the Lower Ninth Ward for 20 years with nothing but sweaters on in weather like this. The moral to that story is that cheap wine is human antifreeze but I will go with some black CDM coffee instead.

I volunteered to help out with the Health and Wellness fair at KIPP Central City School today. It was warm the day I signed up and I didn't see this freeze coming. I guess they are handing out cold medicine at the door. Not only will I be cold but there will probably be a handful of daddy volunteers and I know they are going to make us lift all the tables and heavy stuff. How am I supposed to collect all the free handouts from the vendors and steal food from the refreshment table if I am busy working.

As a avid internet reader that has had to sit through negative and mean spirited comments about his city from people in the surrounding areas, I am going to enjoy every minute of news coverage as the corruption story in our neighboring parish comes together. It's going to be a lot of fun. I'm pretty sure that the actions of those officials will only reflect poorly on them unlike when something happens in New Orleans and it means that everyone is like that. I wish New Orleans politicians would have taken a lesson from their neighbors. Corrupt suburban politicians made sure to take care of their constituents enough where they didn't pay attention to all of their deals. Aaron Broussard will have a lot of support in Jefferson Parish. Things look so run down in the city that people have to look into everything constantly. If crime cameras would have led to record convictions and reduced the crime rate by 50% hardly anybody would have worried about who got the contract. When things don't work, don't see anything, and so many other things are going wrong then the public wants life in prison for whoever messed up that deal.

I have a question. How paranoid can we be as Americans about terrorist attacks when the guy who tried to blow up the plane in Detroit boarded the plane in Amsterdam? Shouldn't we be questioning the Amsterdam government instead of our own? You can't get on a plane in America with a bottle of water. Is every country in the world going to adopt whatever changes we make? Now everybody is worried about the body scanners as an invasion of privacy. If letting security see my New Orleans Saints boxers and a birthmark will assure that I land on the other end in one piece then so be it.

The alleged bomber pleaded not guilty today. 300 people on an airplane watched him set his ass on fire and he pleaded not guilty. Even the late Johnnie Cochran couldn't have won this case when it goes to trial.This sounds like it's going to be a waste of tax payer dollars. Just plead guilty and get it over with.

I know there hasn't been a Saints post from me but it's not because of the losing streak. I'm just resting on the bye week and seeing who we are playing. I'm no bandwagon fan. I'm 30 years strong win or lose.

Basketball players are high in the urban hierarchy. Not only do they possess all the material assets that most guys in the neighborhood risk their lives to have, their money is legal. They can buy the cars and clothes without fear of attracting the police. Even though their money is legal they still embrace the same destructive culture the rest of us do. We already know that instead of changing how they carry themselves and bring the hood up to them they ignore the advances money and access have given them and come back down to a level that puts them in position to lose everything. The only part I am surprised about is that it was Gilbert Arenas. He’s never seemed like the kind of guy that would wanted to play that role. I don’t believe in putting extra responsibility on famous cats to change the culture we have now but if the situation in their old neighborhoods where family and friends live is so bad they feel the need to be protected them should want to change that environment more than anybody.

"It's about 65 degrees below zero outside."

Now you know how the Buffalo Bills feel when they line up for a home game in December!

It's ridiculously cold. The ice sculpture created by our dripping faucet didn't even melt in the sun. I worry about people being stranded by busted pipes and broken furnaces, and skidding around if there's any ice on bridges. About the airline security, I predict that one day every traveller will have to give over all their clothes, and put on little airline outfits for the trip. Taking off our shoes was just the beginning. sp., n.o.

I'm glad you had a little time for porch-sitting. I appreciate your views on candidates very much.

Wrap up your babies and your old folk, we've got two more nights of this, at least for now. Monday we'll all get up and try to find a plumber, I suppose.

Here's a clip for you of two guys who are completely made of music and it's warm and sunny in their song:

These are the words that I have been hearing since before Christmas: "Blustery" "Bone Chilling Cold" "Alberta Clipper" (I don't even know what the f@#! that is!) "Arctic Blast." My favorite was, "We will experience these conditions into the foreseeable future." WHAT?! That's wack. That's the only reaction I can have to that, because I'm to cold to string together elaborate thoughts.

Arenas is a MORON. DC has some of the toughest gun laws of anywhere in the country, so for him to be so stupid is just mind boggling. I can't really be sympathetic. He knew better. Contrary to what he might say, he knew better.

The sad irony underlying Arenas' suspension is that Abe Pollin, the late owner of the Wizards, changed the name of the team from Bullets. Pollin felt that Bullets was the wrong name for a team for a city that at the time was wracked by gun violence.