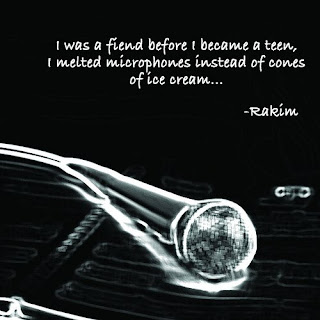 Friday morning I had to speak at a meeting. I knew almost everyone in the room by first name but for some reason I felt nervous. After I sat down and tried to figure out what was wrong with me I realized I wasn’t nervous. I just didn’t feel like talking about the topic at hand. This happens to me from time to time. I hit the wall when it comes to dealing with stuff and I get tired of thinking so much. Between the job, school issues, bills, money, and problems of friends and family, Cliff needs to reboot his hard drive.

As corny as it sounds, this is when I go back to hip hop to clear my head. Say what you want about the music but it calms me. I used to be one of those kids on the bus heading to school with the Walkman radio and the backpack full of tapes and batteries. That was the last part of my life that I didn’t have anything to worry about. I didn’t care about much except for school and trying to get a date or two. It’s back during the time when I used to challenge Brian on who could make the best mixtape. That’s before all the stuff my daddy used to preach about applied to my own life situations. It also separates me from him because he hates rap music. It’s when the Ninth Ward wasn’t infamous and we just lived and hung out there. I can’t say if things were better or not but my mental burden was sure much lighter. It does for me what Motown does for older generations. I guess that’s why through all of life changes I still stay true to the music as long as the lyrics aren’t too crazy. There are future queens at the crib so I can't be listening to some of that garbage.

I think my blogging is a way of letting out the frustrated rapper in me. The only difference is bloggers don’t have groupies or money. I’m just doing what I do for the love of it. Friday morning I left for my meeting with my morale really low. When I got in my truck I had to play something to put my energy in the right direction to do what I needed to do. A Tribe Called Quest did the trick.

You don't have groupies?

I feel you cliff, bad hip-hop goes hand and hand with bad education...

i can go deeper than that but i think u get my drift....