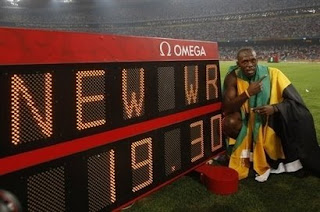 I’m sitting here trying to figure out why I am so into these Olympic Games. The last time I really got into the Olympics was 20 years ago. I just got through watching the women’s beach volleyball final and it was so exciting (not for the women this time). There are two things I am wondering about. What the hell is Jamaica feeding those sprinters and why do all of these Chinese teenagers look as big as my five-year old? One of the women from the beach volleyball team just sprinkled her mom’s ashes on the sand after they won. That was a tear jerking moment.

Why does NBC stick the microphone in the face of these athletes after they fail and don’t win a medal? You know they have been training their whole life to get to this point and it sucks to not win. I wish I was there and someone interviews me with the way I hate to lose. Bob Costas would turn red.

That was messed up how they interviewed the brother about two minutes after he realized he has been disqualified from his medal in the 200m race. He should have punched that guy.

Man, I wish I had the money to go to Jamaica next week for the coming home party of Usain Bolt and the rest of the track and field team. You could party at least three days from the contact high.

Thank goodness the USA Basketball team is returning some respect to hood basketball. If I have to listen to one more commentator talk about how the world is catching up I am going to scream. If they are catching up so much, why do all the foreign players choke in the NBA playoffs?

Would I be a bad American if I was pulling for a Brazil vs. Cuba Women’s Volleyball final? I don't mean to be disrespectful to all the American sisters. They are awesome too. ( I am such a pig when the volleyball is on.)

Some of these sports are kind of ridiculous. Why is walking an event? Trampoline? Badminton? Equestrian? The horse is doing all the work. They might as well put Horseshoes and Cool Can in so New Orleans can bring home some gold medals. ( I realize that most of you don’t know what cool can is. That’s a true New Orleans hood game right there.)

If I was a male Olympic walk racer, I would compete hard as I could for a medal but would never watch a tape of myself switching like that. There are just some things a brother from the Ninth Ward can't have on videotape.
Posted by Clifton at 8/21/2008 12:00:00 AM

Heh heh, funny thing is, racewalkers have to watch themselves on tape to perfect their form. I know becuz my dad kept getting DQ'd and I had to tape him so he could figure that out.

The interviews with these athletes who haven't performed like freakin' Bob Costas & Co. have really pissed me off. Leave 'em be, dammit! Get out of Allyson Felix's face if she didn't beat the Jamaican gal in the 200.

The other thing that freaked me out was when they pointed out the various injuries a Russian synchronized diver had sustained throughout his career. It looked like "Operation", with the only thing missing being a pair of tweezers hooked up to a buzzer.

Come ON. The guy's DIVING. Don't point out where he smashed his lower back. Ewwww.

I am right there with you on these Olympics. They're the best ones I can remember. I'm so in to it.

Usain Bolt is fucking out of this world. I love the showmanship.

The swimming was awesome, some timeless moments.

Indoor volleyball has some serious athletes and takes some serious strategy on both the male and female sides. There was such depth to it. Good stuff, world's most underrated sport.

There are some seriously gorgeous female specimens running track and field - I'm a wreck over Lolo Jones.

I think the best part is that the US isn't totally dominant. It feels good to be an underdog and it's cool to get more familiar with people from other places.

Of all the NBC Olympic talking heads, that guy who interviews the track competitors as they leave needs a serious cockpunch. Really. There isn't an interview I've seen yet that doesn't involve some cringe-inducing-did-he-really-just-ask-that question.

Usain Bolt. Wow. That's what this is all about. Damned the corporate broadcasters for only promoting the glory of U.S. gold. There are so many more great stories. I wish they'd even profile the stories of those who struggle to make the olympics and fail to come away with a medal. They are *all* champions.