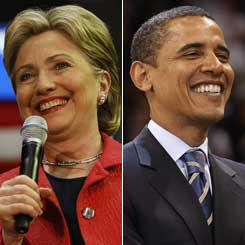 Many people will say that the race for the Democratic nomination is still dragging along because Barak Obama is having trouble putting Hillary Clinton away.

Some people will argue that it’s still going on because Hillary Clinton won’t accept defeat and is refusing to back out of the race.

I say that this race is still going on because the Democrats are stupid. If you had a winner take all system like the Republicans Obama would have been the nominee after winning twelve in a row. This is why you guys can’t win big elections. You are always trying to play both sides. How did Hillary get all those delegates if she lost so much? Conversely, how did she win a big ass state like Texas and not even shrink Obama’s lead? The candidates are not the problem. This dumb process is.

This is why you couldn’t vote to start the end of the war. You are too worried about making everyone happy. Sometimes leadership has to make a decision and let a few people be upset. George Bush has been getting away with it for 8 years. His approval rating might be low because his decisions have failed terribly but you never hear anyone say how they wish he was trying to make everyone happy. If people think you are going to play both sides of the fence they are going to think you are weak and McCain is going to be president. He’s going to have another month off riding around on the straight talk express and these two will still be fussing even though they agree on almost every issue.

Clancy and Silas are probably shaking in their boots after reading this. LOL

But for real, the Democrats' lack of resolve and incredible display of uselessness during the 1st six years of Bush's presidency are precisely why I left the party and registered as an Independent.