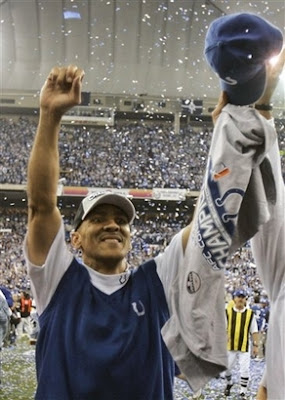 Today's blog is dedicated Tony Dungy for being the first black coach to win a Superbowl. In American professional sports there have only been nine coaches total to ever win a title. There are 119 Division One college programs that have 46% of black players. There are only 6 black coaches at these programs. That's why Tony Dungy winning was a very big deal.

It's not just that he won and his skin is dark. Tony Dungy has class, dignity, faith, and character and he didn't compromise any of it to make it in a profession dominated by people that don't look like him. He kept his head up after the tragedy in his family and he didn't show any bitterness when he was fired in Tampa and another man got to take all the credit for something he built. It goes to show that if you stay true to who you are things can work out for you even when there is adversity. That's a great lesson in this day and age when black men seem to want to go to war for the slightest sign of disrespect. I've never heard anyone say a negative word about him as a man. You never have to cross your fingers and hope nothing stupid is coming when Tony Dungy is on television. As a black man and a sports fan you have no idea how much that means.