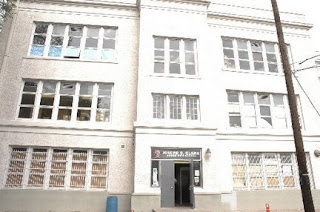 First Line Charter Schools is taking over my alma mater Joseph S. Clark Senior High School. It will now be the Joseph S. Clark Preparatory High School. If there’s one thing about the city’s culture that has taken a hit it’s the high schools. A lot of the old high school names are gone. I still don’t know why they couldn’t give charters and keep the names of the schools like coming up with some new age name was going to take away any issues the kids were having. Nevertheless I want to thank the folks involved with First Line for keeping the name and the colors. We are coming out better than some of our friends’ old schools.

The first week back from a two week vacation was not supposed to be as hectic as mine was but it’s cool. It’s Friday afternoon and I am finally back into the swing of things. It took me a few days to feel like I wanted to be engaged in anything. I was afraid I wasn’t going to snap out of vacation mode. I guess it’s better late than never. I pulled through just in time for a three day holiday weekend. Since I worked so hard this week I am going to do the right thing and stop working to write this blog.

This is always one of the best weekends to be in New Orleans. It’s Essence Festival weekend and the city is full of beautiful black people. Even if you can’t afford to go to the concerts themselves you can just ride around or go to the Convention Center and do some “sightseeing”. It’s good for the city to get the economic boost as well. The strange part about this year’s event is that right down the street from the Superdome there’s a trial for NOPD officers accused of shooting down innocent people during Hurricane Katrina. While the city collects the African American dollars to send to Baton Rouge, we are waiting to see if justice will be served for our rights being violated. That’s just another complicated situation when you live here.

We had our first named tropical storm of the season this week in Arlene. I wasn’t really worried about her Arlene because I used to work with someone named Arlene and she was really nice. The one I’m worried about is Hurricane Gert if it makes it close to land. Gert sounds like one of the guys who used to walk around trying to steal other people’s shoes in the 7th grade. Don’t mess with anybody named Gert.

If the Jefferson Parish sheriffs can shoot coyotes why can’t the New Orleans sheriffs come out to my house and help me deal with the raccoons?

I read a story about Wal Mart and some developers bringing back the Gentilly Shopping Mall which isn’t far from my house. There’s a line at the end of this article that got my attention.

“Neighbors at the time balked at a $15.9 million proposal by Wal-Mart to open a big-box store at the site. While the project would have limited the public's risk and quickly jump-started commercial activity, residents said they wanted a retail mix.”

What retail mix were they looking for? We already got a Simply Fashion, a Rent A Center and a Beauty Supply store in the other new development across the street. What high end stores are you holding out for? Let these people spend this money before we end up with the biggest Family Dollar store in America.

The NBA lockout has started and is going to combine with the NFL lockout to send the sports junkie inside of me into full panic mode. You know the NBA lockout is going to be rough because while the NFL keeps promoting their league like everything is okay, the NBA damn near shut their website down and took all the pictures of players off it. They are going all in on the lockout. The NBA players are not going to get a lot of sympathy from fans and they have people like Stephan Marbury to blame. He hasn’t played a game since I was two shirt sizes smaller and still collecting checks.

My good friend and great blogger Beauty Jackson wrote an article about African Americans in the media. You should check that out.

The Riding Tide conference is coming soon and you can still register. I just want to let everyone know that despite the fact I received the Ashley Morris Award they still make me pay full price. There's no need to call Lee Zurich. There are no hookups in the blogging community.

Essence Festival tickets are getting higher and higher. I thought they would go down a little since black America has something close to 16% unemployment. I guess the ones that are working are doing pretty well. I’m still trying to decide on if I want to come out of my pocket and pay for tickets. If I do decide to pay to get in it will be only to see New Edition with the hope that Bobby Brown is there. I keep thinking he’s not going to be and I have already seen the group without him. He’s on the Essence poster so I figure if I pay and he’s not there I should be able to get a partial refund...............and if you ain't down with the great Bobby Brown you need to question everything about entire life. He's the king of R&B!

i work in the 1/4. and yes this is the weekend to see some of the most beautiful people i see all year in the 1/4.

i dont care what body type turns you on. you will find yourself looking at old ladies and saying to yourself "damn i bet she was hot in the '40's".

there is just something mind blowingly amazing about that many people walking around with pride , purpose , and passion.

i think some one at the arena owes these cats and kittens a royalty check.

i gotta tell ya that unless you wanna burn a whole tank of gas going from the river to claiborne , coming in from elysian fields , rampart or basin take a bus, cab , bike, or have somebody drop you off on the fringe.

now if cruising is your idea of a good front row seat by all means come on down in the car and bring your patience.

i saw two bad crashes on rampart this afternoon on my way home from work.

how two cars in gridlock can get in such a bad wreck blows my mind.

as soon as i heard of arlene it made me think of that old bo diddly line , easy arlene dontcha give me lip.

as to the walmart, when i read that the only sound that would come out of my mouth was one of those scooby doo, whoorps?

i sure as hell dont remember being asked about it.

is it because i live on gentilly and peoples?

one more block to the east and i would have had a vote?

ms. hedge morrel has about worked my last nerve as a registerd voter.


as to the danzinger trail, letten seems to have his ducks in a row.

why these f-mooks didn't plead out is beyond me.

the cover up and the non plea before trail is gonna be the diff. between the 10 - 20 they would of got and the life sentence they are going to get.

The first time Walmart pitched, they pitched to Pontilly and they (the dummies of Pont. Park and Gentilly Woods) voted against it. I voted for it. The Gentilly Civic Association got involved because they (other subdivisions) make up gentilly as well.I think they're(Walmart) gonna win this time. I was for them the first go' round. I remember when Gators and the rest of 'em was in the mall...wasn't a great place to shop then. I also was living in Pont Park when the Seminary was Maison Blanche and the storage facility was Sears and Roebuck. Those were last high end stores to grace that area...before the Lake Forest Plaza went up and they moved to the east. I hope NORA takes the Walmart deal. It's the best solution for the area.