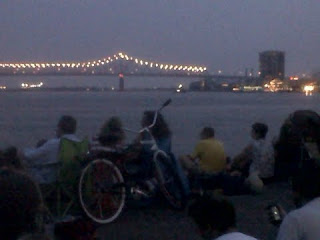 The feeling of not wanting to be around people can hit me at the wrong times. The latest episode of that came this weekend which is messed up because it’s one of my favorite times of the year. I didn’t do anything Saturday or Sunday because I just didn’t have the energy. I could barely keep my eyes open most of the time while lying on the sofa doing nothing. I felt really lazy and I was upset with myself but I never got up to do anything either. Besides a quick run to Taco Bell I had accepted the fact that Monday was going to end up the same way.
Somehow I got talked into going out to the riverfront and watching the 4th of July fireworks display. I was aggravated when I first got out there because I had to walk three blocks. Once I stopped sweating so much from the walk and got comfortable I took a look around me and checked out my city.
First of all the city always looks great from the riverfront. You almost forget all the drama that lies beyond that. Every demographic was covered. There was a Hispanic family to the right of us. There were a few hippies behind us. On my left were two middle aged white families with matching red white and blue shirts on. Then about 40 people from the hood pushed their way to the bottom of the levee for a good spot and no one told them anything because there are rules to living here. It was almost like waiting for a Mardi Gras parade without the obnoxious tourists.
There was a guy dressed like Uncle Sam walking through the crowd. The Natchez riverboat passed through while the ferry went back and forth. There was an even a second line band that passed through followed by a bunch of people that can’t dance. I felt like I was trapped in a real life episode of Treme. All we needed was Kermit Ruffins playing the Star Spangled Banner on top of Jax Brewery.
Right before the sun went down I looked to my left and could see the Claiborne Bridge. I thought about how from the steps of my Auntie Anna’s house on Tricou Street you could see the entire fireworks display without having to be bothered with all those people and since she’s gone and so is the house there’s no way that’s going to be happening again. That still bums me out and it probably has a lot to do with why sometimes I just tune out the world during holiday times since Katrina started. I’ll stop thinking about that kind of stuff one day.
Despite all my issues and aggravation I was glad that I went. Everybody had a good time and the kids out there really enjoyed themselves. Plus, I have always been into fireworks and the show was cool. I guess hanging out with random local folks isn’t so bad sometimes.
Posted by Clifton at 7/04/2011 11:13:00 PM