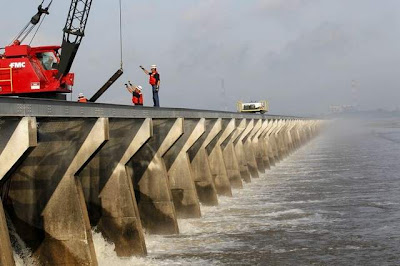 I just left a nice even at KIPP Central City Primary school to celebrate the first year of the CP3 Afterschool Zone. It’s a good program and the kids had fun. Chris Paul and his family are very down to earth people. I’m going to miss them when he signs with a big market team. Once I got home I turned on the television and started checking out some of the New Orleans Voodoo arena football game. I was happy to be at the event this evening and to see the Voodoo playing at home because that let me know there is no impending doom from the rising river. I don’t think Chris Paul and his family would be hanging uptown in danger.
Since the river started rising I have learned that the word flood is a trigger to wake up a lot of post traumatic stress. Some of my friends even asked me where I was evacuating to. I’m not tripping like that. I am 99.9 percent sure we are safe and sound thanks to the levees and spillways. I have to say however that the .1 percent of me that is unsure is so magnified after Katrina that I have been checking news updates every 15 minutes just to make sure that nothing has changed. I’m mad at myself for doing it but I can’t help it. If I am going to live in New Orleans for the rest of my life like I plan to I am going to have to trust the Corps of Engineers ability to protect me and my property from water. If I can’t get to that point then I need to move. I will give them credit for putting in a lot of work the last few years. I think we are a lot safer than we were on August 28, 2005 and I hope that in the next 100 years nothing happens that puts that to the test.
This weekend the Corps of Engineers is going to open the Morganza Spillway which will relieve pressure on the levees in Baton Rouge and New Orleans but give us all guilt when thousands of people near the Atchafalaya River are flooded. There's no such thing as a good scenario when it comes to rising water.
One of the most disappointing things about everyone being paranoid about the river rising is that the City Hall bribery trial isn’t getting the proper shock and awe it deserves after this week’s testimony. I hope that’s the reason you can’t find the story on most of our local news websites front page. I hope it’s not because of the fact the people in question are well connected and their skin tone doesn’t match the criminal element a lot of people in these parts are willing to embrace. I’m going to be positive and blame it on the river. Dambala was at the trial and it looks like he had a good time. As huge Soprano’s fan I had to wonder that if Tony, Paulie, and Silvio hadn’t shot Big Pussy on that boat for being an informant and dumped his body in the ocean his testimony would have sounded a lot like Greg Meffert’s. When I read about him and his boys using my tax dollars to act out a scene from a Cash Money Record video all I could do was shake my head in disgust. You only get to the level of spending public money they did when you have absolutely no fear of retribution.
There’s a huge part of me that hopes when the move on Ray Nagin starts someone finds a offshore account with a few million dollars in it. I have been one of the few bloggers to defend the former mayor so I don’t want him to be a crook at all. I just hope he didn’t put his name and reputation on the line for landscaping at his home and vacations that he had enough money to pay for himself. A trip to Hawaii is how you corrupt a regular working man like me. It should take at least seven figures to corrupt a successful business man like Ray Nagin. He’s going to look worse than Bill Jefferson if that’s all he got out of the deal.
In the last few years there’s been a lot of discussion about leadership in the area centered on race. I think trials like Mark St. Pierre’s should end some of that and bring us closer together. Mayor Landrieu won almost every black precinct in the city partly because of the fact the brother in office before him was tripping. Plus, when you look at the people who have fallen in the last few years for corruption across the metro area, I think we can call the contest to prove who’s the most dishonest a tie and move on.
There were some conservatives who objected to President Obama inviting Common to the White House for a poetry reading. A few people even called him a thug. I guess when all else fails when you are trying to scare America pick on the rapper. If Common is a thug every guy I know is a thug because the thug threshold is very low. I’m going to dedicate this Common song to Sarah Palin and Karl Rove. If either one of them can write anything this creative I will walk right through the middle of the hood with a Sarah Palin t-shirt.
Posted by Clifton at 5/13/2011 09:11:00 PM

Glad to see you sitting on the porch tonight. Thanks for pointing to Dambala's report of the trial. I'm very glad to read it.

These people have just got to be brought in, tried and convicted, humiliated and punished. When Dambala mentioned so casually $56M thrown away on tomfoolery like these people carried out, I felt sick. That's probably the least of it and still our schools don't have books, people don't have homes, kids need playgrounds and libraries, we need parks and gardens and community centers. People in New Orleans--all of us--have suffered enough from corruption and mismanagement. The vultures and criminals have got to be stopped.

Maybe we are all getting to the place where it's more about who is doing right and who isn't rather than about which side of some divide we are sitting on. That'd be a big step forward, in my book.

Man you shouda posed a link to the Cash Money Record video.