Shaken Up By Gustav 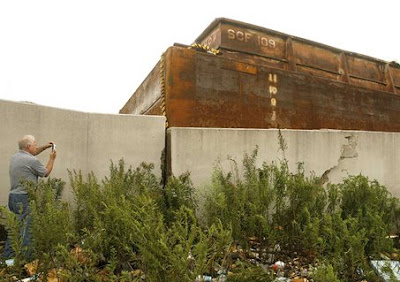 For the first thirty years of my life I lived in New Orleans and I never really feared Hurricanes. I guess it was because we never had a big one do any damage we could relate to. People older than us talked about Betsy but they never acted like it really bothered them. They wouldn’t leave for any storm. No one left for storms. Then Katrina happened.

For the last week we have been waiting and dealing for Hurricane Gustav to hit. He came along at the right time to make us all realize that we are really screwed up mentally. I am not exaggerating when I say that Saturday night after Gustav ballooned to a category 4 with potential to make it to 5, my only goal was to not have a heart attack or die in my sleep from anxiety. I just kept thinking to myself that I have come so far and have so many good things going for me now three years after Katrina. It took a lot of strength to get back to that point. This whole event with Gustav has knocked me back into a reality that I was trying to ignore.

The reality of it is as much as we love the city, we are going to have to accept the fact that at any given time during hurricane season we may have to leave and not come back for a long time if ever. My patience is wearing thin for all this evacuating. It’s been three years since the last time but it hasn’t been long enough not to drive everyone crazy. I don’t really feel like starting over so as long as the levees hold and we don’t have a direct hit I guess I will have to start accepting that as a normal part of life. Even that is going to require all kinds of energy that I could use towards something else.

What I can’t do again is start over. I didn’t secure my house before I left this time (foolish on my part). That’s because I figured if the levee breaks and we are under water I am not fixing it anyway so the windows won’t matter. My head hurts and my heart is pounding. When I started writing this water was coming over the top of the Industrial Canal levee wall. If that wasn’t enough to kill you, the news reported there were loose barges in the canal that could have easily hit one of those walls and started our second massive rebuilding in three years. Plus, it brought back memories of the barge floating in the Lower Nine when the levee broke during Katrina. It makes you wonder in the back of your mind if that’s not what broke the levee the first time. I wish those news cameras would have been on that bride in ’05. If you have never watched a massive pile of water threaten your city on television let me tell you something. There isn’t enough liquor, legal or illegal drugs to help you deal with that scene. My blood pressure and heart rate haven’t came down yet.

Anyone with any type of education or skill has no reason to live here without really wanting to out of a real love for it. Personally, I could spend the next forty years just sitting on a porch somewhere downtown drinking and laughing with my neighbors. As much as I love the place, I don’t know if I can live with this anxiety when I could just move to higher ground and love the city from afar. If it happens and we have to go, at least we can say we tried to make it work but nature decided it wasn’t a good idea.

So we made it through this time. Now it’s back to the house whenever the mayor decides its safe enough for us to be in the city. The storm must have done more damage in the city than I thought. Everybody is going back before us. I bet the surrounding parishes asked him to let us come back last because they have all the stores and don’t want us coming over to shop until they everything up and running to take our cash. Most of us are out of the city hanging in limbo. It’s a good thing the Saints have a game Sunday or we might not be allowed to come home until next week. I’m doing all this complaining out frustration and aggravation and yet, I sit in a hotel in Baton Rouge dying for the moment I can get across the city line. I don’t know why. There is nothing waiting for me but aggravation and anxiety until the rest of these storms in the Atlantic pass. At this point I am just hoping that the oak tree in my back yard isn’t lying in my kitchen. That will be the final blow to my fragile sanity. I think I will be fine when I get to sleep in my own bed.
Posted by Clifton at 9/02/2008 11:27:00 PM

I'm just glad to see your words again. Return when you can.

Glad you evacuated and that your home is OK. Stay safe my friend.

I like to new look! Glad you are back. How did the tree hold up? T