Mind Blowin Volume 14....Who's in Control 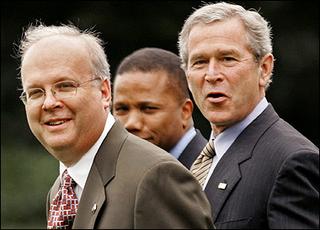 Karl Rove is the most powerful man in America and it's time that everybody realized it. Why do you think that George Bush called him "The Genius" during his victory speech last November. There is no way Karl Rove gets indicted or gets fired for anything concerning the White House leak about Joe Wilson's wife. I don't care what he says to the press. The Republican party owes Karl Rove too much for bringing them to power to ever watch him fall. He would have to do something really drastic for that to happen and this leak isn't enough. If you watch Fox news and look at the way he is being defended, you can tell they know he is the key to any decision that George Bush makes. Anything you hear the Republicans say they believe Basically, Rove is the puppe tmaster in the White House and Bush absolutely needs him more than anyone else. If it wasn't for Karl Rove, John Kerry would be president right now. I wonder how many people in the inner city even know who is the man with the power to total cripple any chance of anything progressing. My people just don't watch the national news enough and stay inform. They have no idea who Karl Rove, Karen Hughes, Bill Frist, Tom Delay and a host of other people are that are making decisions about our lives. They could reverse the civil rights bill and these fools wouldn't even know why they had a separate fountain and a crowd at the back of the bus. It drives me crazy to speak with one of my friends and mention Donald Rumsfeld and they look at me like I am speaking Russian. That ignorance to current events is what allows people like Bush, Rove, and Cheney to send young people to war to keep you occupied while they do all kinds of other things and no one is paying attention enough to create any public outcry. The rich get government contracts and the poor lose benefits and get No Child Left Behind. Four more years of Bush and that is all because of Karl Rove's ability to make Middle America fear gay marriage and Janet Jackson's breast.
Posted by Clifton at 7/19/2005 10:54:00 PM