Monday Night Football: Retro Bitterness And The Eyes Of Intensity 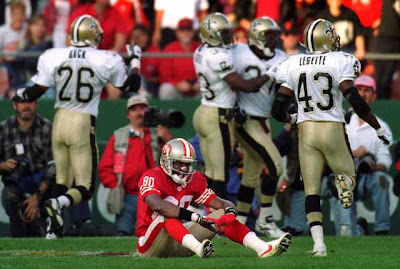 The Saints will be playing tomorrow night against the San Francisco 49ers. I love the fact that we get so much prime time exposure now but the weeknight games are draining. I’m looking forward to a Sunday afternoon kickoff. At least this week’s game is on the road so everyone can calm down. I was afraid we would have another parade where different bands from around the area perform their rendition of the Crunk song.
Before I talk about the game itself I want to talk about the opponents and their coach. The one team that represents all of the struggle and near misses of the pre-Sean Payton and Drew Brees era is the 49ers. In the early years of their dynasty those games would be hard to watch because they would destroy the Saints. During the Dome Patrol years our biggest challenge was the fact that we played in the NFC West division with a dynasty full of Hall of Fame players. Except for one down year on their part when we won the division in 1991, we were always a step behind those guys. In 1988 the Saints finished 10-6 and didn’t make the playoffs because we lost to Joe Montana twice. I will always feel like if we could have earned a first round bye for one of those seasons last year would have been our second Superbowl appearance. That’s why for me the San Francisco 49ers can’t struggle enough. The football season always feels better when they and the Rams are sad. Their fans have five championship DVDs and the Jerry Rice highlight reel to watch if they want to smell greatness.

The current 49ers are coached by Mike Singletary. He holds a special place in my heart because he makes me remember watching games with my daddy. Whenever the Chicago Bears would come on television with Mike Singletary was their middle linebacker the announcers would be obsessed with showing shots of his eyes to prove how intense he was. They would go on and on about as if the other 21 guys out there weren’t just as intense. My dad loves football but he hates announcers. He prefers to watch the game on mute. On Mondays he would be so busy and working so hard during the day that he never had time to worry about who was playing but he would always stay up to watch the game with me. The best games would be a Bears game because it created the chance for this kind of exchange to happen.
Me: Are we going to watch the game tonight?
Daddy: Yeah, we can watch the game. Who’s playing?
Me: I think it’s the Bears against the 49ers.
Daddy: Bears?....dammit! You mean we have to look at this motherfu#$’ eyes all night long?
For the next three hours I would laugh every time Singletary mad a tackle because I knew the eye shot was coming and Big Cliff was going to start tripping out. I want to thank Mike Singletary for looking like a mad man and the announcers for overreacting to it. It was good times in my house.
There are three NFL teams that have a must win situation in week two. One of them is the New York Jets because after talking as much trash as they have for months if they lose to the Patriots and start 0-2 their aura is gone and their season could be ugly. The second team is Dallas for the same reasons. The other team is the 49ers who were supposed to take over the top of the NFC West and contend for a Superbowl berth. They had all of those expectations and could barely get their plays called last week. I expect that they have prepared for this game against the Saints like it’s the NFC Championship. The Saints haven’t played in almost two weeks and I don’t know if they are ready for this kind of atmosphere in week 2. It could catch them by surprise and the 49ers could come out so intense and play with a huge sense of urgency on their home field that we can’t recover from. If that happens then the Saints will get their wake up call and snap out of the 2009 celebration. If the 49ers don’t come out like that then I guess we will still be riding the Who Dat high next week because playing like mad men is the only way that their coaching staff with Alex Smith at quarterback can beat our staff and Drew Brees.
I’m calling the score 24-14 Saints. I think you are going to see at least three long touchdowns by the offense after being a little out of sync last week. The Saints are too well coached and can win games in too many ways to lose this game unless the 49ers come out playing like they are trying to save their coach’s job and stay that way the entire game. I don't think they can do it unless Ronnie Lott and Joe Montana have both been wearing Reebok Shape-Ups and are coming back for this game.
Posted by Clifton at 9/19/2010 12:30:00 PM

I was wondering if there would be parades before every game! and also, will everyone wear their Saints shirts to work for every single game, or just the first post-Superbowl real-season game. This is new territory. I came to work in ordinary clothes, but I think I guessed wrong. have fun, sp

Cliff,
Just wanted to chime in on behalf of all the lurkers. I rarely comment, but you have a great blog.