Congratulations Again To The City Champ 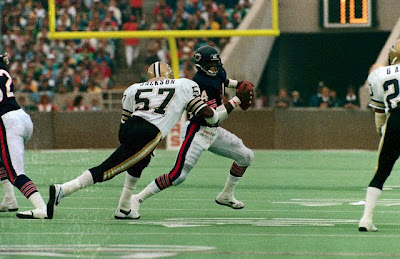 I know my team’s place in NFL history. This weekend my favorite NFL player of all time Rickey Jackson is going to the Pro Football Hall of Fame at the same time as Emmitt Smith and Jerry Rice. I love Rickey but those are two of the top ten players in NFL history with a lot of rings. I understand why they are going to get the majority of the spotlight. I was hoping that the NFL Network would dig up a tape of one of # 57’s games in his prime so the rest of the country that are not long time fans of the Saints would understand just how good of a football player he was. I hope there aren’t many people that think he got in because the Saints went to the Superbowl. That probably made the committee look at his resume closer but he earned it on the field. He’s going to look good in his yellow blazer.
I have the same love of football that I did when I was ten years old. The only difference now is that I have a better understand of how life works and money flows. I understand that the Saints are only here because we found a way to make it profitable for the owner. I also realize that as much as we love someone like Drew Brees, if Miami would have put up a few more dollars and been more positive about his shoulder injury a few years ago he’s probably playing there and the San Antonio Saints may have started training camp this week. That’s not a shot at Drew. Those guys get beat up in the prime of their lives and need to make all the money they can. I don’t get mad at any player for doing what they have to do to get paid even if it means not playing in New Orleans for my team.
I can dig that at 36 but when you are a kid sports are different. You look at those guys like they are larger than life. I was 7 years old when The City Champ was a rookie. I grew up with his career. That wasn’t easy because before Jim Mora and Jim Finks hit town some of those Saints teams looked so bad it almost seemed like they were losing on purpose. Through all of that Rickey Jackson brought it game after game. He never whined and he never complained except for that one time when he gave the Trigger Man speech that I and my dad still quote when leadership is breaking down (Greatest post game interview ever and I can’t find it anywhere). That’s why for the first time I am going to watch an entire hall of fame induction ceremony because from my perspective the greatest Saint ever is getting the recognition he deserves. I’m sure that about 20 years from now some current little kid is going to feel the same way about Drew Brees.
P.S.
If anyone knows the post game interview I am talking about when he talks about the trigger man please let me know where I might find it. It happened during the season when Steve Walsh was quarterback.
Posted by Clifton at 8/05/2010 09:09:00 PM

There was a period in the first couple years of the 90s when it was pretty well understood that the Saints were a SuperBowl caliber team. A lot of people, myself included, think the year Finks made Bobby Hebert sit out would have been their best shot. They were the best defense in the league. With Hebert, the offense would have been adequate. (The Saints played the exact same style of ball control football that won the SuperBowl for the Giants that year with Jeff Hostetler at QB, for Chissakes!)

I felt cheated by Finks and I think Rickey did too. I can't find the "trigger man" thing either but I remember Rickey telling the press that he wanted to be a GM someday which I think was in reference to the Saints not admitting their mistake with Walsh. Personally I felt like Finks was at least as interested in winning negotiations with players as in winning football games and Rickey hinted at that same thing in his own way.

Two quotes I dug out of the T-P archives:

1) Sept 8, 1996 to a reporter asking why the thought he was so beloved by fans: "You know how they always say New Orleans has crooked politics?" he said. "Well, they finally had somebody come in who was straight. I call a spade a spade . I'm going to do the right thing. I'm going to be honest. I'm going to treat a man like a man. I ain't going to try to beat nobody out of nothing.

"That means something to people. Ain't got too many of that kind left. So when you find somebody like that, you fall in love with him."

2)December 17, 1991 on Hebert's performance coming back from an injury on a Monday Night game vs the Raiders: "If we lose one or two, like Bobby and Dalton, then it just shuts down the whole team. When we lost Bobby, it just shut down the whole team. When we played some games without Bobby, we had them, but we just let them go. But tonight, everybody out there just played as hard as they could. Bobby's one of the best quarterbacks in this league. He's in the Joe Montana -class. Everybody here knows it. That's the key to everything."

It's a shame too because the year of the Hebert holdout that defense had some of the most dominating performances I have ever seen. When Brett Maxie and Gene Atkins were in their primes at safety I would pick that defense over any other. By the time Hebert got back and was playing well again the window was closing. There was no way that defense deserved John Fourcade and Steve Walsh.

The Bobby Hebert holdout season would have went down as the most costly holdout in NFL history in a bigger market.