A Visit To The Neighborhood 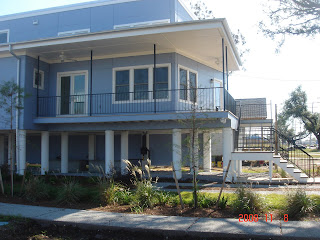 For the first time in awhile I spent some time down in the Lower Ninth Ward this weekend. I saw a few family members. I had a few bowls of gumbo. I went to see my family house for one last time since someone told me there was a demolition sign on it. I ended up standing next to the big oak tree outside of it talking to my childhood best friend for a few hours. He was visiting his mom who’s back in her house on the block. When you spend almost everyday with someone for over 15 years you can start talking and lose a few hours easily. He’s the only guy that shares every memory from that block. That was a much needed reunion as I was slipping into one of those after Katrina feelings of detachment. I was amazed at how many people drove by and blew their horn at us. It’s like hardly anyone lives where they used to but they just drive down there to check on the neighborhood. I thought I was the only fool who did that. It felt like 1988 without our neighbors or businesses. 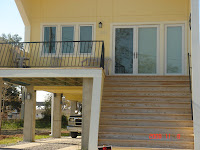 While I was down there I drove over to and checked out some of the homes honorary Lower Nine Soldier Brad Pitt has built from his Make It Right Foundation. I took a few pictures and posted a few with this blog (My pictures suck because I didn't get out of the truck. I know those folks living right there get tired of people taking pictures of their houses all day.) The first thing I thought to myself is that if houses that look this cool would have been around back when I was growing up every kid in the Ninth Ward would have known who lived in there and been jealous. Then I thought to myself how they have the cheapest energy bills in the city since there are solar panels on each house. There’s even a playground that has solar panels to power the lights.

Brad Pitt had a radical idea for hurricane recovery. He presented a plan, people gave him money to do it, and then he did what he said he was going to do. Sometimes great plans are very simplistic. I was wondering. Has the city council or the mayor recognized this man for this work? Has he gotten a key to the city? Does he get to ride in the Zulu parade? What about a good pot of red beans? Maybe we can give him and Angelina a second line in their honor when they are in town. I would like to nominate Mr. Pitt for a new position in the city. He should be the Director of Doing Exactly What You Said You Were Going to Do.

I think Brad Pitt should get a Congressional Medal of Honor for his good deeds. It's the most frikking inspiring thing I've seen -- more than anything, because it's getting done!

What Brad Pitt has been able to do is pretty remarkable. Do you know if his organization has any plans to go elsewhere once Tennessee St. is completed?

Amen on Make It Right DOING it right! I was just down there today..and it is an impressive start. I hope it keeps going.

I'm so happy you got yourself a taste of the good ole days! :-)