Week 3 - A Letter To The Coach 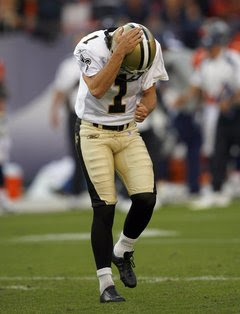 I know it’s only week three so I am not panicking, There is 13 games left and you could easily win ten in a row and have the best record in the league. However, I have to say that watching you guys give away winnable games is messing with the start of my week so I need to say something. I want to help you out by sharing a phrase that one of my brothers from another mother Trevor likes to use whenever someone is over thinking and trying to do things that they don’t really have the means to do. It has become a part of our regular vocabulary.

“Dance with the girl you brought to the prom”

See, sometimes you have to take an assessment of what you are working with. I was a pretty good basketball player growing up because I was smart enough to know that a 5’6 dude with big legs wasn’t going to play in the paint like Shaq. I focused on the things I could do and did them well. Now, let’s look at your team.

You have a defense (except for Mike McKenzie and Jonathan Vilma) that plays like a Westbank levee. They can go at any minute when pressured. You have one player (#42) that is so terrible the minute he hit’s the field offenses change their game plan just to throw at him. You have one running back (#23) that plays hard and tries hard but just doesn’t have the extra skills to make up for your soft offensive line. The one back who maybe could get a few yards on his own merits has a mysterious illness that requires his uniform doesn’t get dirty in the second half. This is the theory I have developed to explain why Deuce isn’t playing on these do or die plays. Your kicker is a psycho who might cry for the rest of the week and never make another kick this year after missing that last field goal today. That leaves you with two solid dependable things, Drew Brees and the passing game plus the world class skills of Reggie Bush. Stop taking the ball out of both of their hands when the game is on the line. Until you realize you have a team built for passing the ball all the time and not playing smash mouth football, we will continue to live up to the name Saints and hand out charity wins every week.

Scott Fujita is also a pretty solid go to guy. (How much longer is he out with his injury?) They REALLY need to beef up their defense though.

My worry isn't with them putting points on the board. Without a doubt, the Saints WILL put points on the board. However, they HAVE to stop the other team from scoring. And though I agree with you that Brees and Bush have chemistry, I believe that he also has to rely on some of the other guys that may not have the speed of Bush, but definitely the strength to move through some of the big guys. I will be glad when Colston returns.