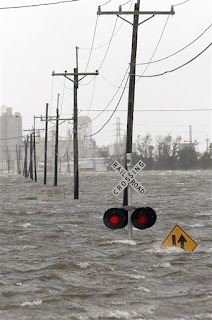 Well, we are now out of the dreaded cone of error for Hurricane Ike’s path. Today was the first time in weeks I can say that people around me were relaxed and normal. You still have to be leery of the thing until it lands in some poor place. I feel bad for anybody in its way. We should take the time to send regards and help if you can to the folks in South Louisiana, , and the . Gustav was rough and Ike didn’t help the islands any. I know there are a few months left in hurricane season but this usually the time of year you have to be very careful. The ones that come in October and November usually don’t get big enough to scare you. I don’t want to jinx anything.

This may be an interesting weekend. All the refugees from that’s living in may be running home for Ike. Oh my goodness! It’s going down this weekend! I’m staying home.

I realize now that the biggest thing we have to conquer here in is our mind state when we evacuate. Before Katrina we always packed with the idea we might be gone a few days. Now we pack everything with the idea that we are leave to start a new life. We are going to have to get to a point where we trust the protection and not have a funeral mentality when we hit the highway.

I have to give credit to Governor Jindal. Say what you want about his politics but when it was emergency time that guy was in charge. I am not used to being giving the exact day and time that things are going to be happening and it actually happen. He might cut every social program in the state budget that helps people but at least he is not leaving them behind to drown or die in hospitals with no power. You have to respect him for that.

I know the mayor was a little over the top in his storm warnings but he had to be. These folks don’t scare easily.

All looters should not be taken to . They should be shot right in the ass on sight. People are just getting back in their homes and shouldn’t have to deal with that when they are leaving to be safe.

It’s time to look into Entergy to find out what they are doing with the infrastructure. Something is wrong with their routine. The tree cutters came by to cut the tree limbs away from the power lines while the power was out last Thursday. I asked the cat cutting the trees if he thought it was better if they did that BEFORE hurricane season. To make it worse, they still haven’t came by to pick up all the mess they cut down.

I can’t believe that in 2008 when I can go to Google Earth and check on my parent’s house in just by typing in their address that people had to stand outside in the heat waiting for disaster food stamps. There had to be a better way for that to get done. It is bad enough we had to spend hundreds of dollars to leave for the “Mother of all storms”. Now people have to stand in line like third world refugees just to get a little relief. As much as I wouldn’t mind replacing all the food I had to throw away, I am not standing out there.

I appreciate Duff sending me that chart of the Katrina levee breaks in my comments section. After the Times Picayune reported this morning that there were 70 loose barges in the canal during Gustav, I want the levee breaks during Katrina looked into even more. That’s right I said 70. I can’t link to it because for some reason nola.com doesn’t have the story. That’s really strange because it was their front page story. Just take my word for it. Actually if you go over the I-10 high rise and look to your right you can still see two of them they are trying to remove because they went too far out of the normal water level. Those big ass things can knock a levee down easy.

"I realize now that the biggest thing we have to conquer here in New Orleans is our mind state when we evacuate. Before Katrina we always packed with the idea we might be gone a few days. Now we pack everything with the idea that we are leave to start a new life. We are going to have to get to a point where we trust the protection and not have a funeral mentality when we hit the highway."

Dear God, that is IT. I can't tell you how many books I was gonna take with me before my husband got me to leave half of 'em here.

And I am happy we're outta the cone, now. Worried for Texas, though.