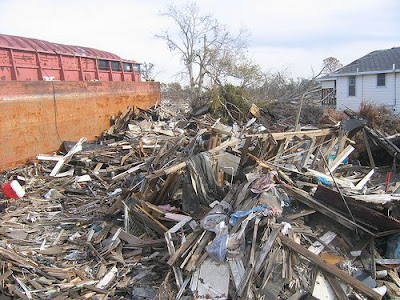 In all the time since I have been blogging after Katrina you have never read any conspiracy theories about levees being blown up and things of that nature. There are certain things you keep in the back of your mind but in the spirit of moving forward you don’t throw it out there. Well, this time I feel compelled to do it. I think it’s time to have another investigation into whether or not the barge seen floating on top of houses in Lower Ninth Ward during Katrina actually broke that levee instead of the storm surge.

I was watching Lee Zurick at the top of the Monday as the water was being blown over the top of the old west levee wall at the . At the same time Angela Hill was interviewing someone from the Corps of Engineers (This is not the Corps responsibility. She just happened to be talking to him.) about the news that three barges were loose in the canal. She asked him questions that seem to imply that the barge during Katrina hit that wall and caused it to fail. I’m not saying that was her intent but it does make you start to wonder.

I remember that morning when the breach happened in the Lower Ninth Ward. There was no wind blowing in the city yet. I know from first hand accounts that one of the reasons it caught everyone off guard is that there was no wind blowing. If the wind wasn’t blowing then how did the water come over the top and erode the wall?

Another thing is how strange is it the barge just happens to turn the right way and fit directly into the space where the levee broke. Shouldn’t it have hit something else along the way? There were three of them this time floating around and yet none of them found there way to the exact direction of the water. Maybe that barge was already in that area and wasn’t tied down correctly. It broke loose when the water rose and hit that wall just like the barge did Monday. The only difference this time is that they were aware of it and were trying to slow it down.

I don’t think it’s irrational to come to this conclusion. You can’t ignore the circumstantial evidence. Lots of people lost love ones or had their lives altered forever. I don’t know how you go about re-staging that whole event but I think it’s worth looking into. It’s too bad that Katrina wasn’t as mild as Gustav and those reporters could have stood out there and filmed that too. Unfortunately the only people who could probably tell you what happened were washed away on impact.

I think after Monday’s events the people of the Lower Nine and St. Bernard Parish deserve for someone to take a second look at this. It probably won’t happen because of the lawsuit factor. Well, if that’s what comes out of it then so be it. That pain and suffering is real and if someone left that barge in there and changed our lives forever then there should be some compensation for that trauma. Even if there is no compensation someone should be punished. I will be talking about this again soon if I don’t hear anything.

Cliff, you make a compelling argument for exactly the kind of investigation you propose. Good to read your words again. Hope you and yours are well.

I too have always wondered about that barge. That said, there were two breaches on the IC facing the L9.

Other things that make you go hmmm is the revelation in the T-P that some 70 barges owned by Southern Scrap, and only southern scrap, were loose in the IC during Gustav. Then you go and read some of this at We Could Be Famous http://wecouldbefamous.blogspot.com/2008/09/southern-scrap-more-than-meets-eye.html

Had to follow up with some more research. http://en.wikipedia.org/wiki/ING_4727

The barge in question was owned by one Ingram Barge Company. All of the post-K studies of levee breaches concluded that this barge travelled through an existing breach into the Lower 9.

"By late 2007, several investigations were completed that included analysis of the question of whether the barge had a causative role in one or more of the failures in the floodwalls atop the Industrial Canal levees, or whether it came into the city from an already-existing breach. The investigators funded by the National Science Foundation -- from the University of California at Berkeley -- concluded that the barge went through an already-existing breach caused by foundation failure of the floodwall. Another group of investigators, funded by the State of Louisiana, came to the same conclusion. Finally, a $20 million study, funded by the Department of Defense/United States Army Corps of Engineers, blamed the Industrial Canal levee failures on overtopping of the floodwalls by the storm surge and resulting scour and undermining of the foundation -- not the barge."

a court case against ING concluded in March 2008 that the company was not liable.