A Good Start To The Season 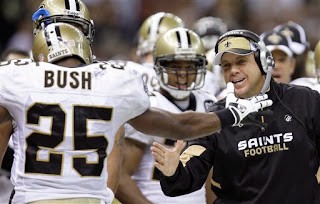 The only thing better than watching Reggie Bush show the world he is ready to have a breakout season as an all around performer was watching the defense actually hold up long enough for the offense to get going. Last year if the Saints offense started off a little cold you could go outside and mow the lawn at halftime because it was over. The key to the season is the defensive line. I also think that in a few weeks Jeremey Shockey will be the biggest cult hero in the city. That guy was born to be a New Orleans favorite. He looks just like one of those cats from St. Bernard Parish who runs a shrimp boat.
This was a big win because Tampa always gives us trouble especially Joey Galloway who may be finally getting old enough not to terrorize us any longer. I won’t make any complaints about today’s game. I won’t even mention the play calling that gave Tampa the ball back at the end. The team looked pretty good. Everything should be fine as long as #42 doesn’t have to play. It would be nice if #29 didn’t play either.

Is Kim Kardashian going to be at every game? Will they show her on television every time Reggie does something good? I just hope Reggie isn’t hanging out with the rest of the people who were in that suite. That was not a New Orleans looking group. I can’t see them coming to a crawfish boil.
Posted by Clifton at 9/07/2008 07:43:00 PM

Hey Cliff, did you mean David and Bullocks? Lol. T.