Stepping Up For Change in Egypt 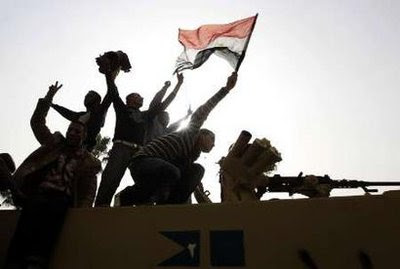 I have been watching the coverage of the protests in Egypt for the last few days but I didn’t want to give an opinion because I wasn’t sure if the President Mubarak was going to start feeling desperate and order the army or police to start hurting people and turn the whole event into a tragedy. There is still a chance of that happening because it’s not going to be easy for him to give up thirty years of power without fighting for it. I hope that doesn’t happen because the unity and dedication of the Egyptians have been quite inspiring. I know there have been some deaths and foolish looting that’s only going to take away from the message of the people but I have been quite impressed. There’s been Christians and Muslims out there walking side by side. I have seen shots of the soldiers in the military standing on top of their vehicles and cheering on the protesters.
One thing that looks apparent to me since this started is that the Egyptians seem to be putting their differences and status aside for the greater good of democracy and a better situation for all. They seem to be saying that if we all get up and work hard everyday we shouldn’t be struggling as much as we are and our government needs to change in order to change that. The people want to have a voice. Things can be complicated when you try to bring about change on this scale. There’s some people who like the status quo who will do things to end the movement. I wouldn’t be surprised if the lack of law and order over the next few days made the citizens start turning on one another for safety reasons but at least they let their voices be heard and brought attention to their struggle.
I can’t think of anything that would make people do this in America other than aliens invading and taking over. That would be the only way we would like at one another in a common vein to join as one and take a stand. When the people in control of things in our country don’t do things to make us all prosperous we blame the people who aren’t prosperous like it’s their fault. The police would be out spraying water on the homeless or people in public housing and other people who are one paycheck away from being in the same situation would be cheering it on. Just look at our military. Every day I see images from the Middle East of our military and it includes people from different races, gender, religions, etc. Those same people out there fighting for our country can come home and see, hear, or read someone blaming people with their background for destroying the same country they are fighting for.
The strange thing is that as much as that angers me, we still got the best deal out there compared to these other countries and that’s what the Egyptians are trying to get. It might be a challenge for U.S foreign policy if the wrong person comes into power but democracy isn’t easy. If that’s what the Egyptians choose then we just have to deal with it.
Posted by Clifton at 1/30/2011 01:21:00 PM