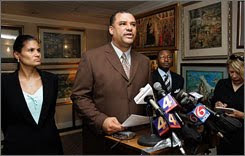 Tonight is the start of former New Orleans City Councilman Oliver Thomas one man play at the Anthony Bean Theater. I hope the show goes well and that soon as the run is over he takes the same message of failure and redemption to the streets and talks to as many young brothers as he can about it. I think he has an important message that goes far beyond politics.

I remember when Oliver Thomas went to prison. It was a sad day in the city because he was a person who everyone thought would be our next leader. It also put black political leadership on life support if you care about that sort of thing. When he fell from grace there was a huge leadership vacuum that is still there in my opinion. All I could think about at the time was how could a man with that kind of a future ahead of him throws it all away for an amount of money that’s not even a drop in the bucket compared to some of the other cases of corruption in the city. The money he took didn’t set the city back by years but the small amount actually made me more disheartened because it appeared he was just going along with the crowd. There are just too many brothers who have found trouble in their lives and he should have known better. He also did much more jail time then he should have because he refused to rat on anyone. There’s just too many people that are terrorizing our community because no one wants to rat. I wasn’t just disappointed I was angry.

I get angry at all brothers who put themselves in situations they didn’t have to be in. It’s not just because Oliver Thomas was on the city council and maybe the next mayor. When I’m just riding up the street and see someone not conducting himself the right way I get upset with them too. I want to get out the car and shake some sense into them. I know how hard it is for a man to get rid of the labels and stigma attached for making mistakes. There are guys my age still suffering from bad decisions they made in their teens. The worst part about having a negative stigma attached to their name is when they embrace it and live out the rest of their lives like they had no choice but to validate it. That brings the whole community down because we have a bunch of men that don’t want to step up and be responsible. Maybe we can’t do anything about the overall view of society but our actions don’t have to match what people think. If we fix our behavior everything will take care of itself. The best thing Oliver Thomas can do with this play and in the future is show the guys struggling to get it together that you can fall all the way down then rebuild everything and prosper. If he can do that he’ll probably get more out of that than being mayor. The community would too.
Posted by Clifton at 1/14/2011 04:57:00 PM