My Daddy Said Think For a Minute Before You Do It 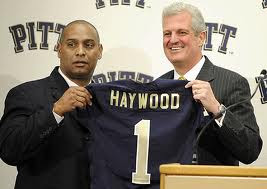 Today is my dad’s birthday. I have probably said this before but I can’t say it enough. I don’t know another man with his honesty and integrity. Compared to him I am a big knucklehead. I might get to his status one day. At least I have something to strive for. When you grow up with a man like that you get a lot of knowledge dropped on you all the time. Some of it comes when you are younger and doesn’t make total sense but as you get older it starts to become clearer. I was thinking about one of the things my dad told me this weekend when I was watching football. Two people really embodied some of his words, Michael Haywood former football coach of Pittsburgh University and LeGarrette Blunt running back for the Tampa Bay Buccaneers.

Michael Haywood worked a long time as an assistant coach until he got head coaching job at Miami of Ohio and he finally made it to a BCS school after all those years of work when he got the job as head coach of Pittsburgh. He had the job less than a month when he lost it after being arrested for domestic violence against the mother of his child. He was charged with a felony, stayed in jail a few days and then was released and fired by Pittsburgh. When I heard about the story I was upset because there are only a handful of black head coaches at the top level of college football and I couldn’t believe he let his anger get the best of him to the point where he would put his hands on the woman and ruin his career. I saw it as the same lack of critical thinking that lead to so many black men reacting violently and ending up in prison with another person hurt or in the cemetery. I didn’t have to hear the full details to think he could have handled the situation better than he did.

Now some brothers will tell me “You don’t know whole story Cliff. That woman could have been tripping and anything could have gone down in there before the police came.” That might be true but if he was thinking about the big picture he still should have walked away and removed himself from the situation. He’s worked too hard to get to where he was to give it all away for a few minutes of anger and the same baby whose mother he was fighting with will suffer because of that decision. He’s got to be bigger than his anger.

Sunday the Saints played Tampa and LaGarrette Blount is their starting running back. He is the second undrafted back to rush for 1000 yards. The brother is physically gifted. There were a few plays this season where he actually jumped over a tackler. The young man has talent and should have a long career. At the beginning of the 2009 college football season when he played for Oregon, LeGarrette got suspended for punching a player from Boise St. after a game. He was projected to be a first or 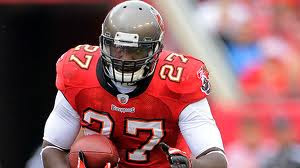 second round draft pick but ended up not getting drafted at all. He cost himself millions of dollars by punching that guy and not controlling his anger.

Now some brothers will tell me “If that had been me and that guy was talking trash all in my personal space I would have punched him too. The NCAA overreacted. It was just a regular punch.” Where we grew up that might be how to look at it but LeGarette was no longer in the hood. He was a man on the verge of making millions of dollars and helping his family and he should have looked the bigger picture and just ran through the tunnel. Once again, he heeded to be bigger than his anger. He let that part of our culture that requires reacting with violence to cost him money. I realize he has a chance to make it back but why take the chance?

It’s like Big Cliff always used to ask me whenever I was pissed off about something and wanted to react to it in a way that wasn’t going to change the situation. He used to ask me if my anger and my reaction to it were worth the relationships I would damage and the opportunities I would lose if I responded in the wrong way. If the answer is no then you have to take a deep breath and think a minute before you make life harder than it has to be. There are times when you have no choice but to fight. There are other times when you have to take a deep breath, suck it up and move on after looking at the big picture.

I need a refresher course every now and then.

Angel with a Broken Wing said...