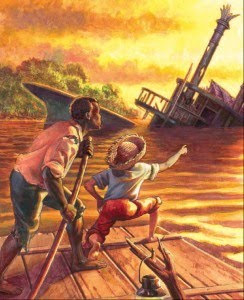 Whenever I see something like an edited version of Huckleberry Finn that removes the n-word I can’t help but wonder who is this being done for. I guess the easy thing to say is that it’s racially insensitive to black people. That argument would have a lot of weight if I didn’t hear the n-word while listening to music all day or read it 10,000 times on Twitter. Maybe the editors of the revised version of the book decided to do something we can’t do for ourselves and remove the word. That’s a nice gesture but we didn’t need it. Maybe I would be for removing the word if the book was set in modern times where we should be passed that. Huckleberry Finn was set in the early 1800’s. Not only did they call black guys the n-word but there wasn’t that many who would even admit they knew how to read in order to be offended by Mark Twain’s words. Things were different back then and the words in the book fit the time period.
I guess they are doing it for the kids but taking out the words that fit the times weakens the understanding of life and history for the kids who read it. If your child asks you why they keep using the n-word then explain it to them. Stop trying to change how history happened or how real life works. One day I was reading Little Red Riding Hood to the kids and was waiting for the part where the big bad wolf gets busy and takes out grandma. I was going to use it to teach a lesson there’s some shady characters just like the wolf so you have to be careful. My only problem was that in the version I had grandma wasn’t even home when the wolf got to the house. He put grandma’s clothes on and all that but he didn’t really try to mess with Little Red Riding Hood either. They ended up hanging out or something at the end of the book. Instead of my great speech about being careful around strangers or hairy men the only thing I could say at the end of the story was “Who bought this fake ass version of Little Red Riding Hood?”
I’m going find me an old version of the story where the wolf eats grandma and gets his ass chopped up for it. While I am there I am buying an old version of Huckleberry Finn with all its n-words on display. Maybe they will read it and realize just how far we have come in a relatively short amount of time. I would rather have the kids have to put up with that uncomfortable word while reading a book then have them read a watered down version of the same story and be misinformed about what was really going on in those times Mark Twain wrote about.
Posted by Clifton at 1/05/2011 12:39:00 AM

You never cease to surprise me with what you think to write about.

This makes me wonder if the story of Rapunzel still has her father locking her up in the tower and her rescuer instructing her to let down her very long hair so he can use it like rope ladder. After that, how in the world would she ever want to go anywhere with him? Boy that must have hurt. I remember puzzling about that story when they used to brush my unruly hair, pulling it so hard tears came to my eyes. I'll bet they don't tell it that way anymore, either.

I feel sorry for a lot of kids who get these sanitized versions of old stories. I wonder if they grow up thinking life is fair and good for everybody but them.

I really hate when I watch a movie on commercial TV and they bleep out the n-bomb. WTF?!

I'm in agreement with you. I'd rather face the pain of history and REMEMBER it, than revise history and forget it (hence, doomed to repeat it). I bought the original Grimm's fairy tales for my kids because I like the old-fashioned scare tactics ;) We aren't preparing them for anything other than failure if we hide the gritty truth.

I believe the point of this censorship is to assuage white guilt, or something. I'm reading some Faulkner right now and there's definitely some passages I wouldn't want to read out loud at the coffee shop. But what's written is what's written. Censorship sucks.

We recently got a version of Snow White which includes the step-mother being forced to dance in red-hot iron shoes to her death. But I think even older versions of the story feature a jealous mother rather than foisting the evil on a step-mother.

Anita, I think it was a witch that locked Rapunzel in the tower, not her father.

Let's be clear on one thing. This revision is not taking place for some "politically correct" reason, or because some African-American or Native-American was offended (as they've been saying on right-wing radio for three days).

This revision is happening so white people can continue to believe the illusion that nothing wrong ever happened in America's past, ever, especially not at the hands of white people.

Liberals remove the N-word from Mark Twain. Conservative skip over the old Testament.

I think the adaptations of fairy tales and changing a piece of authored literature are two different things. Fairy tales like Snow White or Rapunzel change with the times. They are unauthored, uncredited stories with different, valid versions in different cultures and different time periods. I'm completely cool with that.

Revising a piece of literature is another thing altogether. People SHOULD be offended by the use of the n-word in Huck Finn. They should read it and think, "DAMN, racism was different then. It was completely socially acceptable to marginalize a whole group of people based on their skin color. I wonder what's changed. This kind of racism is not socially acceptable now--but clearly it's still happening," etc.

Taking out an "offensive word" serves only to let people pretend that things were different than they actually were. It's revisionist, pure and simple. And it's wrong.

I quite agree with robyncz's assertion that people should be offended. And that the word should remain just as Mark Twain intended it. To pretty things up to remove any content that makes us uncomfortable is just plain childish, dangerous, and yes, Wrong. (With a capital "W"!)

(wv: nomor, is in No More Censorship.)

I am of the school of thought that removing the word takes with it the history that was attached. Should we forget that not so long ago, there was a world in which the n-word was dropped as a casual adjective. "Oh no, not HUMAN Jim...the other one..." Slippery slope here, my friends. My friend was reading one of her nephew's history books, and it referenced the Africans "coming over" to the United States, almost as though it was a great, voluntary migration. No good will come of this.

Editor B: Thank you. Clearly I was an imaginative child who tended to disagree with her father quite a lot.

Everyone else thanks for jumping on this as an example of one way we are encouraged to pretend our past did not even happen the way it happened. Beauty Jackson is right on, how can a child's history book include lines about Africans "coming over" to the United States? Do they just skip over the whole history of slavery? On another site somebody suggested that people are really not taught history any more. I'm beginning to wonder if that isn't literally true.