Creating Our Own Climate For Violence 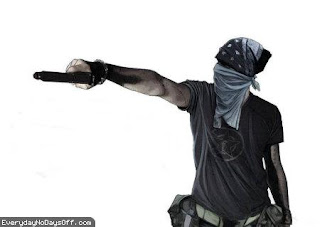 I’ve been thinking about words and the climate they create since the shooting in Arizona. There has been a lot of conversation about how words have consequences and the current political climate may have lead to Jarred Loughner feeling more compelled to to carry out what he did. We still don’t know if that’s necessarily true or not but if it is true and six people lost their lives because of it, I wonder how many people have lost their lives because of the climate in my community.
How much of a price do we pay for a nationwide climate of destructive behavior? In New Orleans we had 176 murders in 2010 and some of those victims are dead just because that’s what happens when there’s a conflict in their world. I would argue that the climate of hate created in the black community is worst than anything the Tea Party or a fringe group could come up with because we don’t use violent references to pull people over to our viewpoint. We embrace it, celebrate it and put it on display for the world to see as a way of life. We have a lot of financially successful people who do nothing but add negativity to the atmosphere.
The reality of the situation is that those of us who are more equipped to handle some of theive images and words tend to try and blow the impact of these situations because we watch the same shows and listen to the same music. It’s not making us kill anyone or have kids we can’t take care of or have unprotected sex so it can’t be all that bad. I’m not trying to exclude myself from the problem. I love ignorant entertainment and I listen to some artists with horrible lyrics but despite all the negativity the thought of harming another man or disrespecting a woman never crosses my mind. I’m relatively stable just like most of the people who listen to talk news shows or follow some radical political leader are. We learned from the tragedy in Arizona Saturday that the climate doesn’t have to energize millions of people to run out in the street and do something crazy. It only takes one to make a tragedy.
To create a culture like we are trying to change now all we need is a few dozen kids without the proper parental guidance along with other social and economic issues and do nothing but sit in front of the television or computer all day watching images of how it’s cool to kill somebody as long as you are getting your hustle on, and that bitches ain’t shit, and how you should always keep it real no matter what, and how it’s kill or be killed on the streets, and how dignity, respect and community mean nothing as long as you got money to buy material things. Put twenty kids like that in every section of your city and you have an epidemic. I don’t have any statistics in front of me but I know we have more than twenty kids in this situation. That’s why the situation seems so hopeless sometimes. It’s hard to fix something when you are creating your own climate for it.
Posted by Clifton at 1/11/2011 11:22:00 PM