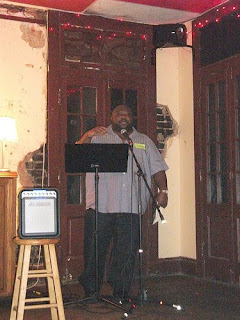 This picture was from my book reading at Mimi's for the Howling in the Wires book reading. Between this, my CNN appearance and being giving award named after Ashley Morris, how could I see this year wasn't a good one.
If I had to describe 2010 in one word it would be bipolar. Never has one 365 day period given so much joy, excitement, pride, sense of accomplishment, aggravation, despair, grief, and frustration all at the same time. The high point was the Saints winning the Superbowl. The low point was definitely the oil spill which showed what happens when big money controls politicians. Less than a year later since the Deepwater Horizon blast you barely hear about the story. At least we didn’t have any extreme hurricanes that made the problem a lot worst. If I take my personal year, add it to the events that affected everybody and look at the hurricane season, 2010 wasn’t so bad. I mean it could have been a lot better without the oil spill, violence in the streets and blatant stupidity of a lot of people but there was no need for Contraflow or constantly refreshing Weather Underground. That’s always going to give a year extra credit. Now it’s time to move on to 2011 with a more realistic forecast of what could be on the horizon.
In 2011 many things will be just like they have been for a long time.
In 2011 there will be a few things that shouldn’t make sense to anyone but someone with a vested interest will try to convince us that it should.
In 20ll there will be a few things that should make sense to everyone but someone with a vested interest will try to convince some of us that it doesn’t to us separate.
In 2011 I probably won’t be changing much about myself or giving up anything because I am pretty cool with who I am and what I do. I finally have a good idea how to balance my different personalities so why mess with it now.
In 2011 even though we are not old, cats my age will have to start the process of taking a more leadership role in turning our community around. The older men who are fighting the battle are already stretched thin, the sisters are doing all they can and there’s a void that needs to be filled. It’s unfair to ask one man to be a hero and save an entire neighborhood by himself. We could start turning the tide by just talking to the kids on our block or ones that we know around town.
In 2011 dozens of new impressive buildings will be built or started all over New Orleans and further strengthen the foolish notion that suffering and loss of life due to Hurricane Katrina was a good thing.
In 2011 I will go crabbing for the first time since the BP Oil Spill. I will probably look down at the water and think it looks a little different, get worried but then tell myself that there’s no harm and keep going. Just like a lot of people in South Louisiana it’s something I have been doing my whole life so I’ll tell myself that everything is safe.
In 2011 Governor Bobby Jindal will cut so much money from the Health and Hospital system that a record amount of babies will be born at home and 2012 will be considered the Year of the Midwife. When a kid says he was born in the 7th Ward he will really mean it because it was in his kitchen.
In 2011……….Three Dat!
In 2011 Drew Brees will commit to being more focused this offseason and only do 500 endorsements instead of the 1000 he did last year.
In 2011 our focus should shift to teaching young men what bad choices are because I’m not sure they really know the choices they are making are the wrong ones.
In 2011 we have to be more focused and dedicated to protecting our children and not exposing them to dangerous situations.
In 2011 we need to do a better job of making young people in our community understand the consequences of bad choices because right now we have too many people throwing caution to the wind and do whatever comes to mind without thinking what’s going to happen afterwards.
In 2011 Jay Electronica will finally release his album so I can stop putting him on the list of things I am looking forward to every year.
In 2011 I will try to push myself and take my blog and my writing to the next level because I can’t talk to these young men about recognizing who they are and embracing it without doing that to fullest myself. I have to do what the words in my blog title that was sent to me by a friend years ago. I need to “embrace my potential and be productive” because that’s what I want the young cats to do and I hate hypocrites.
In 2011 we are going to live, love, laugh, cry, eat, drink and enjoy life. A lot of my people like to take the things they have been through and use that as the reasons why they should give up hope and pack it in. I’ve been guilty of that a few times but now as we go forward I’m looking at things a different way. We are battle tested and ready to handle everything we need to in order to make life better.
Happy New Year and I’ll see you in 2011
Posted by Clifton at 12/30/2010 10:56:00 PM

Happy New Year to you Cliff.