Week 7.. Fastly Approaching the Most Frustrating Season Ever 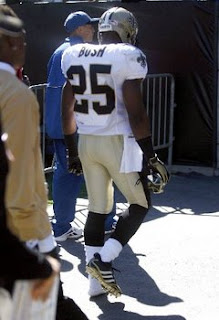 I already detached from any great hope for this team after the Vikings game on Monday Night....

After 30 years of following the New Orleans Saints like they are a member of my family I am almost ready to declare that this season is going to go down as the most disappointing ever. The only season that comes close to this is the year Aaron Brooks played those last three games with his arm about to fall off and we only needed one win for the playoffs. I realize the Saints have had some rough years. We didn’t win a playoff game until 2000.

The difference between now and the old days is that in the old days those teams didn’t have enough talent to win. Even in the Dome Patrol years we were never a better team than the 49ers. It was alright if they lost as long as they played hard. Those teams gave everything even when they were outmanned. They lost a lot and you felt bad for them because you could tell they wanted to win.

Some of these modern guys look like they are out there just to get paid. On paper they should be a contender but for some reason they just look like they play every game in a daze. I watch other teams running around and playing like it’s do or die. My team plays like it’s a 40 game season and they have lots of chances to make up all the games they keep giving away like a charity organization. With the exception of Brees, Bush, Deuce, and a few other guys this is a hard team to root for. This game in London may be one of the most embarrassing in New Orleans sports history and that’s saying something.

Amen about CP3. Am I aiming too high to expect a championship this year with the addition of James Posey?