Close My Screendoor and Go Outside 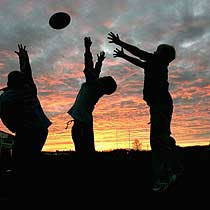 It's a beautiful Saturday in the city. It's perfect outside weather. I’m sitting in my window watching these kids make mud pies. I remember when my sisters used to make mud pies inside of our red Western Flyer wagon. Do people still buy wagons for kids? That’s one functional toy. I can’t imagine being a kid and staying inside all time playing video games. Our parents used to put us out at 10:00 AM on Saturdays and we didn’t come in until Mid South Wrestling came on. Kids should be outside using their minds to make up games to play. Where are the girls playing double dutch? Where are all the little boys playing football in the street? Here are some of the things we used to do.

Teddy Ball – I know this isn’t the proper name but that’s what we called it. All you need to play is some old stockings, a busted basketball and a stop sign poll. Now I don’t know the rules or the object of the game so I can’t tell you how to play. All I know is that if I am driving through and see two girls standing on a corner beating the hell out of an old ball stuffed in that stocking hanging from a stop sign poll I am going to cry tears of nostalgia.

Cool Can – The family kids used to play this in the lot behind our grandparents’ house. The grown folks used to coach us. Only real old school kids know how to play this. Some kids use a stick to hit the ball. Others play by kicking the ball. You set up cans behind the plate and if the cans fall down you are out. You are also out if the person who fields the ball knocks the cans down on second base. We have enough empty lots in this city for some great cool can games. By the way, for the authentic touch the cans you use should be old beer cans and have just enough liquid left in the can so when they fall over the smell gets on your shoes.

Marbles – Do stores even sell Cat Eye marbles anymore? If you are over the age of 50 you can use the circle ring. Everyone under that has to use the fish ring. Me and grandpa almost had our only argument behind this.

"Boy, how in the hell you gonna draw a fish on the damn ground to shoot marbles. That ain't a ring! Put a circle down there."

"Grandpa, this is how we play it."

"Well ya'll playing it wrong. Let me draw that circle.......Now you gotta ring."

Pitch up tackle football – Throw the ball in the air and whoever catches has to run with it and get tackled by the entire neighborhood. I’m not sure how running through 20 guys without any blocking is supposed to be fun but it was. You don’t even need a real football to play pitch up tackle. You can use a tennis ball, old socks bunched together

Man Overboard – When you play man overboard you have two bases on both sides of the park, parking lot, and schoolyard and wherever you decide to play. One person gets touched and he is the man overboard. The object of the game is for that guy to tag someone who’s trying to make it from one base to the other. Once someone gets tagged they have to help him catch other people. Whoever is the last person on base wins and gets to pick the next man overboard. This is a great game for dozens of kids to play together. This is also a game that will lower the fat kids in the neighborhood self esteem. One time Big G got picked as the man overboard and the look of depression on his face after 30 minutes of trying to catch someone was so serious I got caught on purpose just to help him. That moment is probably why we are still friends to this day. Plus, if I hadn’t started helping him we might still be out there playing.

I left homemade bicycle ramps off this list because of all the bad memories. They are the reason I walk with my right leg slightly higher than my left. Looking back at it now, propping up the old dining room table that Peanut's mama threw away under two cement blocks and trying to jump over it wasn't the smartest thing in the world to try. I’m surprised me or any of my friends can have children after some of those ramp disasters. Just talking about it now is making my voice higher.

You know I actually saw a movie set in France where they played a game similar to Cool Can. I was shocked to see the game we used to play in the Desire projects on a movie set in the early 1900's. I wonder if its still being played there. Anyway, those were the days. Children don't play those games anymore. I like playing Red Rover! T.

and what about just racing? i mean, a stretch of pavement and as many kids the width of sidewalk would allow just going for what they KNOW. i've got a shitload of dental work that i can attribute to those good times.

Plain ol' tag, a load of thumb wars, and building squirrel houses with sticks and stones, then playing Godzilla and knocking 'em all down. Red Rover, of course - you could really kill some kids' arms with a perfectly nasty run for their clasped hands.

My son is ALWAYS a big one for digging in the dirt, ANY dirt, even the stuff that someone at the dog park once said was probably soaking up a good amount of dog detritus. I just told 'em that each time the kid played in the dirt there meant Bath Night for him, which he also likes.

And these days, I think one can only find marbles in places like Michael's, where they're sold as stuff to put into decorative dishes on end tables and coffee tables. It's a shame. Cat's eye marbles are waaay cool.

And I scraped the hell outta myself once when I tripped on a hopscotch board drawn on an inclined sidewalk. Any kind of ramp involved in any kids' games spells trouble and possible injury in some way.

We played a variation of "Pitch up tackle football" called "Snatch The Bacon", and who needed a football? We'd used a dang red handkerchief, and run 'til tackled. Man...those games were great.