How Real Change Is Coming 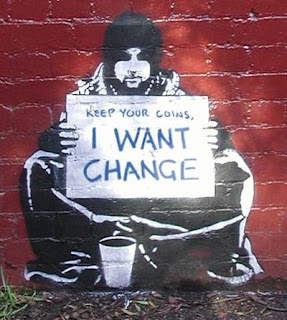 There is no denying that Barack Obama Mania is sweeping through the black community. It’s so intense that people who have never wanted to discuss politics before or sending me emails and text messages about any news story that hits the wire about McCain, Palin, Biden and anyone else that has something to do with the campaign. His impact is everywhere. I wouldn’t be surprised if there are Obama posters in the club. That’s not a bad thing even though it is getting a little obnoxious. It’s good when people are engaged and paying attention. The only part that concerns me is that I never hear most of these same people talking about any of the local races in their area. I haven’t had many conversations about the District Attorney. No one sent me any messages when the senate debate was on television. Almost all of our attention is set firmly on the biggest prize and I understand why. If he wins I plan on sitting in front of my television in amazement with tears in my eyes like everyone else. Knowing where we have came from in this country makes it impossible for me not to get caught up in it.

I also can not ignore what is going on around me. I would just like to remind everybody that all those races you might be ignoring have much more to do with your everyday way of life than the presidency. Remember the saying that all politics is local? That is true. The next president is going to have so many things on his plate from day one. He’s got two wars happening. The economy is in trouble and some things are going on globally he needs to deal with. He can’t possibly be expected to deal with the cats selling drugs on the corner near your house and the conditions of your schools. These kinds of problems start with your house then the community. Then if needed it moves on to your district representation, then to the city, the state, the Congress, Senate and finally work their way to the White House. There’s a whole bunch of folks that have to do their jobs before the president can do anything directly for your neighborhood. You need to hold all those folks accountable.

If you want the change that Senator Obama keeps talking about and you are promoting on those t-shirts, pins and bumper stickers, you better pay attention to who your council person is. You better do some research on the Senate candidates. You better start paying attention to who’s going to run for mayor in your city. You need to do all of that plus make sure your own responsibilities are in order to really fulfill that promise. Hell, we could bring about change by doing this even if he doesn’t win. Barack Obama would tell you this himself if he had the time.

If we don’t maintain that energy and stay engaged personally and locally then I guess all we really wanted was just to see him win for the symbolism and not to really change anything. If that’s the case I suggest everyone get a copy of the inauguration so when stories like this one keep happening we can replay it to feel good about our failure to take care of ourselves.
Posted by Clifton at 10/25/2008 01:36:00 PM

i know of more than a few people who intentionally abstain from voting for the president, but vote for their local politicians, because that impacts them more. this is particularly true when they feel that neither of the candidates can relate to their needs (bush/kerry anyone?). can't lose sight of the forest for the trees...or something like that.

Another stellar post, man. This Public Service Announcement needs to get repeated ad nauseum just like those Obama ads. I think what it boils down to is that local races aren't as sexy. People fail to realize that the folks on your local school board have more of an effect on their lives than the big fish.