My Take on Colin Powell and Why He Endorsed Obama. 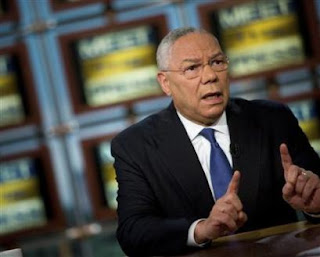 I'm not surprised Colin Powell endorsed Barack Obama on Meet the Press Sunday morning. I don't think he did it just because Barack Obama is black but I think the fact Mr. Powell is black had a lot to do with his decision. Colin Powell is an accomplished and distinguished man by any standard in America. He's been a Republican forever. He's known John McCain for 25 years. There is no way that man made a decision based solely on Obama's color. After listening to the interview, the reason he couldn't support his own party was clear. The tone of the campaign bothers him personally.
Men like Colin Powell and John Lewis grew up in a different time. They have achieved the things they have in their lives because of America and in spite of it. There was a time in this country when someone yelled out "kill him" at a rally people actually got killed. I'm sorry but there's no black person in America with any respect for his journey that could condone that. Actually, no one of any race or political party should condone that and when it happens those events should be stopped immediately and the person who said it should be questioned by the FBI and put on the watch list.

I wonder if there are any Republicans out there who would admit out loud that they had the one man who could have transformed their party forever and wasted his political career to validate George Bush's war plans. Colin Powell is everything Republicans look for in a candidate but somehow he never ran for president. You would think they would have been begging him to run for years.

Republicans need to look into whether or not what they claim to believe about America is actually what they really practice. They say the American dream works for everyone if you work hard. All people have to do is get out there, educate themselves and put their best foot forward to be rewarded on their own merits regardless of things like race and religion but it doesn't show in their own decisions. Condoleezza Rice is more qualified than every candidate who ran for president in both parties including the four people running right now. Did John McCain talk to her about being vice president? If the official word is that she wasn't interested then the question becomes why wouldn't she be? Why would someone of her stature be so content letting people less qualified than her get all the glory? In 2012 the Republican Party should consider a Powell/Rice ticket. That would shake things up and be fun to watch.
I already know that ticket will never happen. I just said it to get the funny responses from people trying to come up with reasons why it shouldn't.
Posted by Clifton at 10/20/2008 01:20:00 PM

Actually, I was hoping McCain would have picked C. Rice for VP. I repeatedly told hubby I would love to see her on the ticket.

Maybe it can be Rice vs. Obama next election.