You Know She Wanted To Slap Him 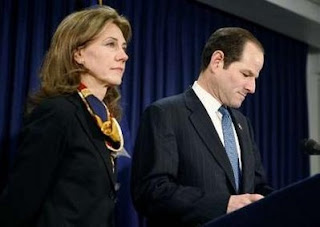 Sex scandals in politics really make you realize just how much personal sacrifice it takes to be a successful political family. Take the governor of ’s wife for example. She has to stand behind that dummy and have this look like she understands and supports him. I am sure they will be making a tape like Kwame and his wife in . I guess you have to make some tough choices to gain power and influence.

Don’t you wish just one time during a press conference where the guy is standing there asking for forgiveness, one of these women would snap and break a chair over his head? Would anyone be mad at her? If Hillary would have slapped Bill when she found out about Monica she would be the president already. I don't know any women personally that's about to forgive over thirty grand a year for getting your freak on. Some cats get have to sleep on the sofa for taking twenty dollars out of the strip club ATM. I don’t want to condone violence but I don’t know if I could stand there next to the guy that spent over 4000.00 a session with a prostitute without at least balling my fist up. I couldn’t stand next to my own brothers after that. I have seen some FINE women in my lifetime. I don’t know if I have ever seen 4000.00 a date fine. If she’s out here in I don’t want to meet her. With gas prices, bills, a recession, the cost of food and Crown Royal going up, and possible school tuition, it would take me five years to pay for our date and twenty years to get over the fact I spent that much on sex. At least Bill Clinton and Kwame used status and talked their way into shame. You are the governor of . I am sure there was someone out there who was impressed enough by that to do it for free or at least a job recommendation. There are guys getting dates using their construction site hard hat and you can't have fun as the governor?

This blog is being ended before I get in trouble.

You just don't understand us women, do you? It's all about sweet revenge where it most hurts, baby. I'm not going to jail for assault and battery for hitting on the head with a frying pan the asshole to whom I've given the best years of my life. In fact, I'm going to let my lawyers handle it or, better, stay married to the jackass and hold it over his head everyday. "You may not have wanted to do this, but now you get to do nothing. Ever. Now give me the credit card so I can go shopping."

The other sadder thing is self-esteem. You know some cheated-on women think, "What would any man want to do with me when even my own husband didn't? What sort of bag am I?" This is why she will stay married, quietly bilk her husband and use that money on a boy-toy and let her husband know she is.

You know it. I know it. Everyone knows it.

The doctor is now out.

Maybe she's thinking, "Damn...I should have buried his draws in the yard like Redd Foxx said."

But seriously, a lot of times, when women sign on as a politicians wife, they are conscientously signing on for all that it entails. And, like Hillary, who's to say that she doesn't have political aspirations of their own. Not every victim is a victim, you dig. There are a whole bunch of people that will look at her as a gutsy brawd that doesn't crack under pressure when it's at it's highest.

And as someone who HAS been cheated on when married, I didn't fly off the handle, run and pack my shit. I also didn't hold it over his head. I actually made sure that I was quite comfortable, and made my move it MY convenience.

Maitri and Breez,
I know better than to question a woman about her perspective on this kind of thing. I just want to make sure that you are taking into account the fact he spent 4000.00 a visit on this woman.

One thing I have also learned is that each woman deals the whole mess of cheating differently. And who's to say she didn't have her piece on the side either. Her harried appearance could just be related to the embarassment by his lack of discretion. These days, there are so many different factors that could be at work.

I am, however, puzzled by the fact that a governor couldn't just get a regular piece of side cooch the good old American way, via a mistress. What's really good with that? If Rudy Giuliana's Nightmare Before Christmas looking ass could get a side piece as a mayor...

Okay, that's not right, but, it's real life. Prostitutes are never a good look.

I know he better not eat any thing she cook LOL