The Audacity Of Entitlement 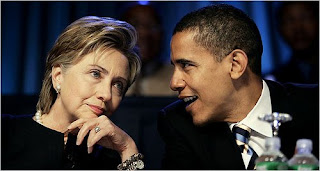 "Sen. Clinton is fighting hard. She's tenacious. I respect her for that. She is working hard to win the nomination. But I want everybody to be absolutely clear. I'm not running for vice president. I'm running for president of the United States of America,"

This week Senator Obama had to shut down any idea of him being Hillary Clinton’s running mate. I know and understand why Barak doesn’t want to be labeled the “black candidate”. The longer this thing goes on the more he has to deal with black people situations. Do you know how many times I have had to train my future supervisor? Do you know how many times I lost jobs to friends of the CEO’s cousins and nephews? The feeling of entitlement in those circles is real. I have spent lots of time working under someone that should have been working under me. Hillary just played the "accept your place" card on Obama.

See, here is where things get tricky. Maybe the people that brought this up didn’t have race in mind when they did it. They are probably just playing the political game. I guess that's what you do when you get behind and time is running out. On the other hand, have you ever heard of the leading candidate being asked to consider being the sidekick before? I don’t think so. That's offensive, dismissive and disrespectful. I would like to thank Senator Obama for responding to that foolishness the way everybody wants to at their job when this happens but needs the paycheck too bad to actually say it.

Personally, I would have added “kiss my ass” to the quote but I guess that’s why he’s running for president and I am not.

Thanks to Neecha for dropping those quotes on me.

I've lost jobs to friends of the CEO’s cousins and nephews, the people involved don't feel entitled, they're clueless.