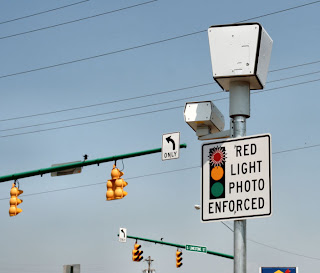 The city’s number one revenue generator just went high tech. Red light cameras are now online in the city of New Orleans. This is going to be so entertaining. I don’t think it’s an exaggeration to say that technology and New Orleans have a bad relationship. A few years ago I got a ticket downtown. I went looking for it for months to pay for it online so I wouldn’t have to take off from work. To this day it’s still not there. I can’t wait for the story about someone getting a ticket from a camera six months after the picture was taken. I may just go hang out in traffic court during the summer. I just hope that the cameras work better than the parking meters we have. I still don’t understand why I have to park, walk to the middle of the block to pay. Then I have to hope the machine is accepting debit cards and has receipt paper in it. If all of that works out, I still have to walk back to my car, unlock it again, and put the paper on the dashboard hoping that the meter maids are not walking on the other side of the car pretending they didn’t see that little piece of paper. Don’t get the wrong idea, I am all for stopping people from running red lights. There are some intersections in the city where you not only need a camera, you need a electronic laser beam to stop some people from flying through the light. The cameras should cut down on that. In Jefferson parish people are stopping on yellow lights now. I have no remorse for anybody who endangers other people by acting like they can’t see that yellow light about to change. I just think it’s fair for people to get the ticket within a reasonable amount of time so they can actually remember being on that street. Let's hope whoever the friend of the city council was that got this contract can make it work right.
Posted by Clifton at 3/08/2008 01:26:00 PM

I though the cameras were going to be put in high crime areas to reduce violent crime.

I guess we'll stamp out traffic violations before we do much about shootings.

I don't konw if you watch that show "The Family Guy." There was an episode where the husband accidentally gave away the VCR for Christmas, and the two yokel kids that recieved it were fighting over the "sex box" with their pants around their ankles. That's pretty much always been my view of technology in New Orleans.