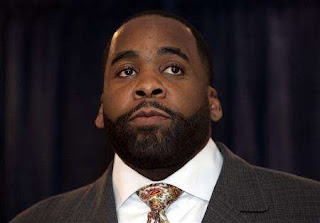 I see you have a little trouble up there in Detroit. Wouldn’t it have been better to just admit you were getting your freak on and only had that one thing to deal with? I know the politics game requires that you don’t step down for the perjury charge but I wanted to ask you to step down anyway. I realize I don’t live in Detroit. Hell, I am having problems with my own vagina friendly mayor here in New Orleans. I don’t have a chance to vote against you but I’m sure if I was in Detroit right now brothers would be walking away from me because I would be ranting and raving against you any chance I got. I will give you the two reasons why you should step down in my opinion.

The first reason is the same reason I would never run for office. See, I know and am very comfortable with all my vices and weaknesses. I know I have the type of personality that would have tried to have a stripper party full of Crown Royal. I would never hold office until I knew I was fully ready to let go of those flaws. Why embarrass my family like that? Then I know we have a problem with how brothers view and treat our women in society. Since politics are where we have set the bar for our best and brightest, I believe that any man or woman who holds office should be morally solid and at least have the will to not break his vows. If you were single the text messages would be kind of funny to me. Every man can slip every now and then. When you slip then you should leave the public eye. Your transgressions don’t make you a bad brother. They do make you unsuitable to lead and represent the aspirations of the people who support you.

The second reason is that those people I was just talking about have a habit of putting their efforts towards protecting people like you. We can’t really help it. We find our drive in the actions of our public figures. The problem with that is that usually the figures themselves can be selfish and have trouble letting go of the power they have to benefit the group. That means the group looks stupid and accepting of destructive behavior. I’m tired of throwing my support behind people who don’t have enough sense to not be taped on camera, wiretapped, or use the city issued phone to send freaky text messages. It’s not a good look for you to give a speech about being called a nigga after messing over your wife and have a room full of people stand up applauding like they were listening to the Martin Luther King speech at the Selma March.

Brother Kwame, don’t do to the people of Detroit what William Jefferson did to us. Get out the way brother, let another person take over as mayor and take care of your personal issues without holding all of your citizens hostage. I got love for you brother but you shouldn’t be the mayor.

I often wonder what make politicians fall into these situations. It seems as though it affects our community more than others. Those like Congressman Jefferson and Mayor Kilpatrick take full advantage of this community and exploit all of its weaknesses. It's time for us to have a higher moral standard for our representatives. Atleast expect them not to hide cash in the freeser or text on the city phone.