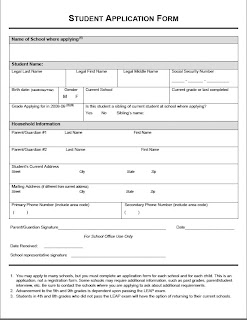 Before you read any of my personal account of trying to get a child registered in school here, I want to give a shout out to my blog friend Leigh who's been all over the school situation and is probably being followed and investigated by the secret society as we speak. Also, I stole the picture of this application directly from G's page. Thank you ladies very much. I am now living the New Orleans school application nightmare so this won't be my last post about it unless I have a stroke from fussing so much.
Let me paint a picture for you. Say there is a nice young family living in Texas since the storm. The area they live in and the school their kids go to are good but they are homesick. It’s two and a half years later and they finally found a place they could afford and decent jobs. They decide to wait until the end of the school year to move back so the kids are not affected too much. Finally, in July they move back to New Orleans. They like the neighborhood, the jobs are cool and they feel good about being home. Then, they start trying to put their children in school but realize that the best public schools in the city either have a two year waiting list or stopped taking applications six months before they moved back. Imagine the feelings of guilt these parents must have knowing they are about to send their kids to a school that pales in comparison to the one they just left in another state or city. To be fair, there are probably more good schools than the ones with the waiting list but these parents would have two problems. The first problem is that they probably won’t have an idea about where these schools are located and what the criteria is to get in. The second problem is they all have stopped taking applications too.
I sent an email to the city and the school board with a few suggestions. I think it would be a good idea to have the same registration dates for every public school and that date should be sometime in June. Our population is changing too much daily for the current process to be fair to parents. The second suggestion is that people shouldn’t be allowed to register a child for school unless that child is actually the age required to go to school. There is no way pre-k programs should have a two year waiting list. People are registering their kids for school when they are two years old and I am sitting here feeling like a bad parent for actually waiting for my daughter to turn four. Waiting might be a costly judgment call. The last suggestion is this. I think the city should spend the money and create a map of every available school in the city with phone numbers and class ratio and mail it to every house in the city regardless if kids live there or not. The person at that address may have ten family members about to return home. We should do it every six months or until the situation is stable (whatever that means). There are schools open that I only found out about by seeing them in the Mardi Gras parade. Who has the time to track every single opening or new charter? Of course, I could always send my baby to the school around the corner from the house. Since they just started cleaning old furniture out of it recently, I don't think it's going to be ready by the time she graduates elementary school. She'll probably end up going across town to a school I have to pay for and have to get up at the crack of dawn like she's going to work in the ship yard.

That situation is abhorrent. It's like a lot of things here, too hard.

Dear God. Welcome to a parent's own hell.

And the RSD, the remains of the OPSD, and the charters (no matter WHAT umbrella they are under) only care about their bottom lines. All other caring families can go jump.

I really really really hope that something positive comes through and this works out very soon. It is a gross and under-examined situation...

This "system" is hardly accidental. This is what was meant by "choice," the "freedom" to register at a school 2+ years ahead of time, to scan every neutral ground for some sign of a school opening, to spend all your free time on it and hope still that you learned enough about the right ones to make a decent decision (and still found time to raise your own child). This is a heartless, made-to-fail-the-children system that will drive parents away and leave our children undereducated and neglected STILL.

Positive? Will these schools all survive? And if they don't, then where do children go? And don't get me started on the separate-is-equal pseudo-philosophy involved...N.O. schools will not be desegregated in our lifetimes and more children will suffer, grow up, have children and cycle through the "system" again. If it's still there.

It's funny because I am at a stage now where I have no idea what to do if she doesn't get in any of the schools we picked. I hate private schools.