My Thoughts On The State of The Black Union 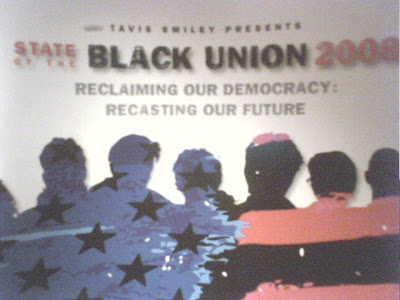 I was truly inspired Saturday at the State of the Black Union. The even itself was cool because I am a big fan of Cornell West and Michael Eric Dyson. Plus, I got to see Dick Gregory act totally ghetto in front of all those intellectuals. That was great.

I think there could be more ideas exchanged during the event if the format was different. The way the event is setup lends itself to many applause grabbing lines. After awhile it seemed like everyone was trying to out do the other person for an ovation. I would have given everybody two minutes to answer and kept it moving. I didn’t hear too many reasonable solutions come up. It’s funny that I watch this thing every year on television and never picked up on this until I was actually there. I love W.E.B Dubois but that was a hard stretch making him the theme of a 2008 discussion on race. They could use a few radical cats mixed in there just to shake the panel up a bit.

Out of all the speakers I saw, Donna Brazile, Michael Steele and Nicole Lee from Trans Africa impressed me the most. Dr. Akbar is the person I want to have a one on one conversation with.

Our local leadership was on full display. Mayor Ray Nagin is crazy. Did he know he was on national television? Why was Cynthia Willard Lewis standing up and applauding comments about people struggling when she votes against struggling people all the time on the city council? Cleo Fields being up there made it hard to take the whole thing seriously. Me and my boy kept wondering if they checked his pockets for cash. It's a wonder I still vote. We should have let Pastor Jones, Ms. Harrison and Ms. Woodard represent the city.

Barak Obama’s nomination dominated the whole conversation. I actually have some new respect for Hillary Clinton for putting herself in front of that hostile crowd especially after they had been worked up into a frenzy. The most amazing thing about the whole Obama phenomenon is how the new school black agenda and the old school civil rights crowd have all come together for the audacity of hope. You need serious game to bring these two groups together. That tells me in the end they are all fighting for the same thing to begin with. If they can keep that understanding after the election is over and listen to one another we might get something done.

Here is what inspired me. I was sitting in the middle of the auditorium on the third level and got a good view of the entire crowd. There were elderly people. There were scores of college kids. There were men and women with their kids. There were church groups and youth groups. There were serious men and serious women. There were even some white brothers and sisters. (That must be why the local media didn’t cover it much. We are not supposed to support one another.) A large majority of these people were from the city and the Gulf Coast. When I first came back to see the city in October of 2005, the hood was so empty that me and my friend stood in the middle of St. Bernard and Broad St. and there was not a car or person in sight except for a Red Cross truck handing out water. If someone would have told me that day that in two years time we would have enough people here to host anything let alone fill an auditorium I would have thought they were crazy. It felt good to see that. I know everybody who wants to be home isn’t here and I know not everyone who should have been taking care of has been. Saturday afternoon was a moment to give ourselves a pat on the back and say we have probably come back further along than we should have with the way things have happened. For that display alone the day was great to me.
Posted by Clifton at 2/25/2008 11:43:00 PM

Cliff, i really enjoyed this event also. The young man from Memphis was really inspiring; as was the young sister from Dillard. He was nervous on that panel, but who wouldn't be? And yes C. Ray Nagin is crazy. But I have to say Dick Gregory was the high light of the event for me. He was ghetto, but he laid down the trueth. And I think we could all appreciate that. In the beginning Tavis was fighting hard to make the agenda the issue and not the candidates, that was a loosing battle for him all day.

A day-late-and-a-dollar-short but I enjoyed your take on the event. I watched it on TV and I have to agree with you on the favorite speakers. Didn't think I'd like Steele (he was the Lt. Gov. when I lived in MD and he was certainly not that engaging teamed up with Gov. Ehrlich!) but I did. Though our positions on this FL & MI thing are diametrically opposed, I'm proud of that sista'! And I could swear I saw several beads of sweat develop on Tavis's brow when Dick Gregory let that "ho'" comment slip out!

I agree the format should be different with an opportunity to hear from the attendees. As a matter of fact, when I went to the 40th anniversary of Brown v Board in DC, the question format you suggested is exactly what he did.

Your inspiration is rooted in good logic. Compared to a year or two ago, you'd not have been able to feel so inspired.

I'm not sure it is the audacity of "hope" for which the old and new schools have come together though. More the audacity of hope to elect a Black man president in my opinion. And while I'd like a Black president myself, I want one that will truly not campaign on change KNOWING he won't be able to change much, given our present state of affairs in this country and in Iraq. It bothers me because the people who have supported him the most, will be the ones to benefit the least. Naive I know, but just tell the damn truth - for a change (there's that word again!). If I was Hillary, I don't know if I would have shown the hell up! That was not a crowd enthusiastic to see her, especially after Rev. Sharpton had riled them up!

Here's a link to my post on the event:
http://lets-be-clear.blogspot.com/search/label/State%20of%20the%20Black%20Union