My Last Word On Obama Until It's Over 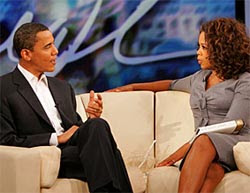 Before I post this let me say that I reserve the right to post something else if it's so big that it changes the race. Right now the writing is on the wall....

Barak Obama is closer to being the president than any man of color has ever been. Tonight my be the death blow to Hillary Clinton. I wasn’t going say anything else about it. The wave of momentum is just too great. I knew it was over Saturday morning when the lady at the car wash asked me if I had went and voted for Obama before I started washing my truck. Who am I to kill the dream? I don’t want to kill it. I’m voting for Obama since Jon Edwards dropped out. I wouldn’t be myself if I didn’t take the time to tell the truth about what’s really happening here. After we finish dancing in the streets celebrating his nomination, we need to tell the truth about what’s going on. I hope I don’t get the Tavis Smiley treatment. It’s okay if I do.


I am voting for Barak Obama because he is the best candidate left for me. I am also voting for him because of the historical significance. That bothers me somewhat because I am long past voting for inspiration. I have been living in a city ran by black people my whole life and it hasn’t been a paradise. I can only imagine if this national thing goes wrong. I just need this thing to work if it happens. If nothing changes then I’m going to be heartbroken.

Have you done any research on his record whatsoever? You are not dealing with Marc Morial, et al.

Additionally, Obama was touted long ago as the potential first black president; long before Oprah's endorsement.

And to vote in the primary, you too would have to be a registered member of the party that has been taking all the rest of "us" for granted for years. Why not register as an independent? (I'm not saying that you or anyone should be bound to this party, but since you made the statement, I'm questioning it.)

You said before that he would not be able to win if he were to run on a racial platform. Has that somehow changed? What he SHOULD be able to do, and what he can successfully accomplish are two totally different things. Further, what white candidate do you know ran on the platform of race. And I'm not talking about showing up at a few churches, I mean the nitty gritty that you seem to want from Obama.

Let's not forget, the brother is biracial, and was reared by his white mother and grandparents. It only stands to reason that he would speak on the unification of all people.

Frankly, the begrudging vote is just as bad as saying a black man can't be a successful president. And that is sad.

Hello Breez,
I respect your opinion but I never said a black man can't be a successful president. I don't think I said anything negative about the man himself either. What I am doing is judging him through the same view I would judge any candidate regardless of his color which is what he says he wants anyway. We can't ask everybody to come together for vote for him then make it about his color if someone has a problem with something. That's a contradiction to everything Obama has been running on.

Besides, why can't I expect a lot of the man that is about to break the ceiling wide open? Once he's sworn in and starts the job, is it ok if we find out he was in over his head because he's black? Why can't I expect him to reach Mt. Rushmore status during his term? Actually, with all this undying black support, shouldn't we expect more than the average president? What is so wrong about that?

Thanx for dropping thru Cliff. Come back anytime! Supporting New Orleans is and always has been - at least for me - the right thing to do.

Here's a great "out-of-the-mouths-of-babes" site that linked to my blog posts on NOLA awhile back that I think you'll find inspiring:

The kids' comments give me way more reason to "hope" than this presidential race ever could. The kids at least see the disparity, speak it and want to make a difference.

I completely agree with your post for all the reasons you've listed. But I won't be heart-broken if nothing changes, it'll just be politics as usual - exactly what Sen. Obama said it wouldn't be.

At least Breez is honest in acknowledging that, "What he SHOULD be able to do, and what he can successfully accomplish are two totally different things." My only question then is, "Are we to vote for him just because he is Black despite the fact that he most likely will not be able to successfully accomplish any substantive change in our lives?" I think that vote is even sadder.

And no, no white candidate has ever run on the platform of race, but John Edwards at least came out of the gate sounding like he would. Bi-racial brother notwithstanding, institutional racism is real. My two bi-racial sons experience it every day since they look more like me than their father. And though they have much love for that side of their family and the United Nations they call friends, it does not keep them from recognizing and speaking that truth.

If we all want to get along, and work together to foster real change, some people are going to get pissed off. I'd rather get pissed off trying than acting like everything is alright and then nothing happens at all.