I'm Going To The State of The Black Union 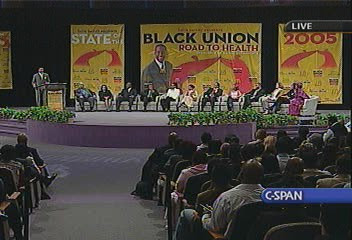 I am registered to attend the State of the Black Union in New Orleans, Louisiana. I would like to invite anyone to read this to attend. I will be there with my Covenant book and my post Katrina attitude.

You can register by clicking on this line.

Cliff, do you think the event is even slightly diminished by the attendance of C. Ray Nagin?

Ashley,
It won't be diminished. I don't think many people understand the impact of Mayor Nagin's lack of leadership. If they did he wouldn't have won re-election.

Cliff, when you settle in, could you post about The State of the Black Union this weekend? Kool-Aid Kids are wearing Tavis out on the boards! Wish I wasn't so broke, I'd jump in my car and come down. :-) I'd just like a first-hand perspective.

Cliff, I registered for the event, but was unable to attend due to the flu.

On Thursday at City Council they voted to demolish the Lockett School in the Upper 9th. I was dismayed that Hedge Morrell had brought a crowd in from the Tavis Smiley Conference to applaud the approval.


Of course we know the RSD probably has no real plans to rebuild there when the dust settles there will be a vacant lot, a sign, and a promise.