All Stars In The Hood 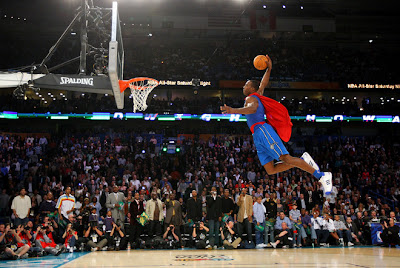 By all accounts the All Star Weekend was a good success for the city. We almost made it through the entire weekend without anyone getting shot. I won’t claim that incident for the city. One shooting is pretty standard for functions with a majority of young black people. That’s a sad but true statement. I wasn’t worried about chaos in the streets because crowd control during events is the NOPD’s specialty. The All Star game wraps a two month stretch of good events for the city including the BCS Championship, the Sugar Bowl and Mardi Gras. Now, we have to figure out a way to generate the same positive energy ourselves for the rest of the year. It makes no sense that the only time we tend to feel good about the city is when we have a large group of visitors.

Here is one positive thing for you. Kermit Ruffins, Trombone Shorty, and The Rebirth blew the soul out of that arena last night. The cool part is that if you live here you can go any night of the week and see a performance just like that. It was good they didn’t use a zydeco band like they always do. They should have gotten Fire Ya Ya and his drummer to march around the arena during timeouts. I am sure he would have scared some tourists but that would have been pretty entertaining to watch Marv Albert trying to explain that.

My only wish now is that the next time we host something on a national scale; everyone can come in their best clothes and have a good time without the need for all the volunteering. I like the days of service but that also means that there are still hundreds of things that need to be done. I think it would be nice for the media to come down and take a ride around some of those neighborhoods to show how well they are doing as opposed to what hasn’t been done. Sooner or later the story needs to be how things have turned around and improved.

Should I be thankful or sorry that I didn’t see any national stories about that colony of homeless people under the Claiborne overpass?

Here is a good column for Scoop Jackson at ESPN2 about the playground situation. He should have added that one of the reasons the playgrounds are still messed up is because some of them were trailer parks after the storm. We had to protect those golf courses.

Here’s a real conversation I had with my cousin during the slam dunk contest.

Him: What’s up with Dwight Howard?

Me: What do you mean?

Him: He’s always smiling and showing his teeth.

Me: Well, he’s young, rich, has a good family, no trouble, tall, athletic, handsome, lives in warm weather, and he’s about to win the slam dunk contest. Wouldn’t you be smiling?