I Knew This Was Going to Happen 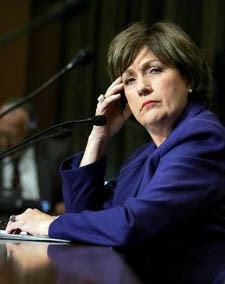 It's a beautiful morning in the city of New Orleans. Kathleen Blanco announced she is not running for re-election and I am ecstatic. I'm not happy because she sucks as a governor. Everyone knows that. I'm happy because this whole scenario finally makes my point about why black America needs to break away from the unwavering support of the Democratic Party. When Governor Blanco was in the runoff against Bobby Jindal there wasn't anyone with at least an 8th grade education that thought she was more qualified than he was. He ran circles around her but with the huge New Orleans African American voting block the Democrats always had added with all the white people who couldn't bring themselves to vote for an Indian, she won the damn race. I still remember her on stage the night of her victory speech and seeing all the New Orleans political Negroes up there clapping and smiling. As soon as she got in office, she started treating the city like her stepchild that she really didn't want to be bothered with. Many people blamed it on her relationship with Nagin. The truth of the matter is that someone in her camp made her realize that the negroes in New Orleans would vote for her against any Republican anyway so why should we cater to them. "Let's act like we are going to teach those New Orleans people who's boss so we can look good in Acadian country and to the folks up North." Then Katrina happened and we watched her freeze up and not have the leadership to make the local leaders around her own state open up areas for people to get out of the water. If it wasn't for the good people of Texas, there would have been out there much longer or shot by the Gretna police trying to cross the bridge. She sat back and watched her most solid voting block leave on buses to Texas. It was her fault and ours for voting for her in the first place. The only thing that could have made her announcement better would have been her saying she was being replaced by one of David Duke's friends. That's what happens when you put all your eggs in one political basket and don't pay attention. I just wonder who is the next person we are going to support based on this kind of thinking. Wait, we already did. Isn't that right Congressman Jefferson?
Posted by Clifton at 3/21/2007 02:54:00 PM