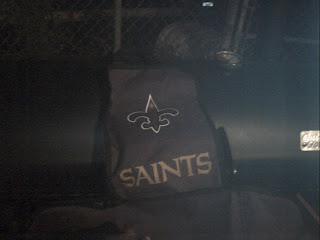 The hurricane come and took my Louisiana home, And all I got in return was a durn country song


For the first time since August 2005, I went outside and lit up the BBQ grill. My boy gave me a goat leg to break in my new grill once I moved back to the house. I got up in the morning, went to the store to get some other meat and beer, to my parents house to get the table off of the porch and to my friend’s house to get my new unopened BBQ utensils my mom sent me for my birthday. It came with a Saints apron too so you know I was ready. The day was great. The sun was beaming but it wasn’t hot. The radio was playing. Kids were running around playing. My neighbor kept coming to the back while working on his house to try to talk his way into a plate. Then my boy finally got over his hangover and came out of the trailer to help me. We had the Crown, the beer, and the meat. What else could you want in New Orleans in March?
Then it hit me. Saturday was my one of my brothers' birthday. That means that I would have been at my parents house in the Lower Nine grilling whatever he wanted. On birthdays we always get to pick the menu for the family. I probably would have gone to Mildred or one of my aunts to ask them how to cook a goat. Then I would have went by Geraldine and told her I had a goat leg, made a crazy joke she would only laugh at because I told it then had to sit back and listen to Bernadine make wise cracks and jokes about the goat for hours while Big Cliff told us everything we were doing wrong on the grill as he left to buy more beer. That would have been fly. Even if it wasn’t my brother’s birthday, everyone knows that before Katrina I was the king of waking up in the morning and turning the desire to grill into a 50 guest event in a few hours. No one can organize a freestyle party like me. Some of that guest list lives in Dallas, Memphis and Opelousas now. While we were outside adding wood to the fire, I mentioned to my boy how the blue rocks in the driveway came out of my fish tank when they were cleaning and gutting the house. He picked a few up and told me to put them in the new tank when I bought it. I started thinking about Big Blue and Tupac my two beloved fish. I started wondering if a catfish that made it through an open window had eaten my boys. After that, we were walking in the yard looking for some more wood and the damn cable I used to tie Sandy to when I had to open the gate is still wrapped around the pole in the shed. I started talking about finding her on one of those pet rescue sites and this stupid bitch answers the phone and swears to me that they hadn’t received any Katrina dogs in weeks when I called. I should have drove to the shelter in Houston anyway. Post Katrina New Orleans may be the only place in the country where you could be having the time of your life and making yourself really depressed at the exact same time. It’s sort of like going to a jazz funeral every single day for 18 months. That’s the emotional price we are paying for bringing our ass back. At least we can still have fun.
Posted by Clifton at 3/04/2007 10:44:00 PM