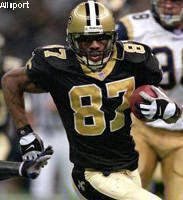 This blog is dedicated to Joe “Hollywood “Horn. We gonna miss you in the black and gold. Pleaaassse don’t sign with Atlanta and make me hate you.

The office is a rough place sometimes. As I sip on this long island tea and watch wrestling, I have to reflect on my day today. Sometimes you just have one that sucked. I can’t focus on anything in particular and the things I want to write about contain a personal conflict. I can’t write about my job because I think I have a nosey co-worker who reads this page and I will probably have to say something about his sensitive ass. I can’t write about the criminal justice system in New Orleans because I have a friend that’s a DA and I got a ticket that’s still floating. I can’t complain about the Road Home program because I have a friend that works for them and I don’t really understand the damn thing anyway. I was going to go off about Walter Reed Medical Center and the treatment of the troops but since I have been checking on a close friend who has a good enough position there to testify before Congress I can’t talk about that. All of those factors mean you get to read a bunch of foolishness until the end of the week. Here are some things to ponder while I get this office together.

Is it okay to call Britney Spears the Caucasian Whitney Houston?

How many times can a woman your mother’s age range age piss you off at work before you say something to her like she’s young? I am going to call my mama and ask her. I am her baby so it will probably be one time and that’s it. She might wanna come down here and get her for me.

How many months have to pass before we are allowed as a people to claim a body and bury it? James Brown died weeks before Anna Nicole Smith and she has already been laid to rest. A perm can’t hold together that long. Its going to really bother me that Brother James started his eternal rest with a dry process in his head. This would have never happened to Elvis.

If I go to the same strip club ten years after the first time I went, is it ok for me to not believe the girl anymore who told me she was dancing to pay her college tuition? I’m just saying…she should be a damn professor by now.

In 2007 New Orleans will enter the record books when a car rolls over a pothole, disappears and ends up in China. It will surely happen uptown where driving to work is like a video game.

Is New Orleans the only city where a bunch of people can get together to reminisce, talk about buying liquor and cigarettes from the sweet shop at five years old for thier family and no one in the room thinks anything is wrong with that?

I saw a dude today who had his pants buckled at his knees. The question I have is where did he find those boxer shorts that went all the way to his ankles? They don’t have those in the big and tall catalog. If I can't send my dad any drawers for Father's Day it will be because the skinny dudes bought em all.

Ladies, I don’t mean to be rude but it has to be said. There is a fashion crisis going on in the hood. Listen, if your hips and waist are the same measurements (36, 36, 36) you can’t wear those jeans that hang on your waist. You don't have anything to hold them up so when you walk they start falling down. When you are in the store and bend down to get something from the bottom shelf, guys come with one dollar bills to put in your pockets. I'm tired of looking at your all your business in Walmart.

How many times must a person call you back to back within a ten minute span before you can cuss at them when you speak? If I don’t answer the work phone and you leave a message, I can’t finish what I am doing, check the message and call you back in the thirty seconds it took you to call my cell and leave another message. The Cliff rule is that if you call me twice before I call you back I won’t call at all for the rest of the day.

I knew I was getting old when someone said there goes Mr. Harris and I started looking around for my dad. It was a long ride home when I realize they were talking about me. Lil Wayne doesn’t sound the same after a teenager calls you mister.
Posted by Clifton at 3/06/2007 11:10:00 PM