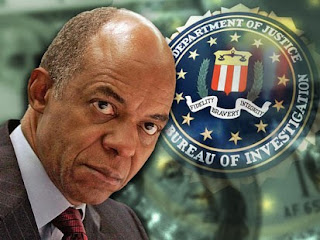 I am tired of talking about you but you won’t go away. You are making it difficult to suppress the angry black man in me.

This is not personal. For all I know you could be a great guy. I don’t really care about you personally. I do care that you have decided to run again for Congress. See, the first time I was angry. I thought you were being selfish. You got lucky because Harry Lee wanted revenge for Karen Carter criticizing the racist policemen who shot at people on the Mississippi Bridge after Katrina so he told all the fools to vote against her and they did it. You had another two years to act innocent while a federal indictment was hanging over your head. I guess the appearance of innocence was worth more to you than thousands of constituents needing as much help as they could from the government.

Now you are running again and almost every member of your family has been indicted for some scheme to take money from the citizens. Your sister pleaded guilty last week. I realize your name wasn’t involved in any of these cases. I’m just saying that I have two brothers and two sisters. My baby brother is stubborn. My other brother is stubborn. My sister might be a little stubborn. I could see how someone could put all that together and think I am stubborn too.

If your sisters got indicted and your brother got indicted, maybe the people on Capitol Hill will come to the concluion that you are corrupt. Who could blame them when you had 90k in the freezer of your house. I’m sure some of them are just as corrupt as you. They just don’t represent a district where there is no healthcare facilities for miles and schools in trailers. There is no Karen Carter this time. I am not sure who’s running against you. My only hope is that all of your opponents are not white. The reason for that is that black people in our area have this philosophy that even a crooked brother can’t do us as bad as a white dude. That’s misguided and damaging sometimes but it comes from years of living in this city and never communicating with one another.

But I don’t have to tell you about that because you already know. That’s why your selfish ass is running again. You are banking on this exact thing happening. You want someone to run commercials about your crooked ass family so you can get on 102.9 and AM 1230 and claim how they are all out to take down the black man so these paranoid cats can believe it and put you back in there until your attorneys figure out a way to get your frozen money excluded from the evidence.

I got news for you Bill. People here are way more pissed than they used to be. We might not be totally ready to vote Caucasian but that doesn’t mean we are running down there to pull the lever for your ass either. If you don’t believe me ask Cynthia Willard Lewis. Do us all a favor and sit ya ass down somewhere.
Posted by Clifton at 6/20/2008 09:20:00 PM

LOL! I love this post. He should sit down somewhere. P.S. We press the highlighted arrow now. I think you are angry because Ole Bill won't sit down.

Thats sounds about right, thats the same way Nagin ignorant ass got back in office.

Can't we all just get along? T.

You are not ready to vote Caucasian? What would you scream if some white guy said he wasn't ready to vote black? Black people are the most racist people in America. We're onto you! By the way, I agree with your take on Jefferson. Now how about the other corrupt black politicians in Detroit, Atlanta, Philadelphia, DC, etc?

Everyday I have to hear about how Obama has to kiss ass to make you feel comfortable enough to vote for him. Black people are racists because people like you thought us how to be that way. Obviously you are one of those cats that pick up on one thing and not read the whole post.

The difference between politicians in those cities and William Jefferson is they are not depending on billions of dollars in federal funds to rebuild a city.

Cliff...ROFLMAO Man!! I'm with the first anon post above - "We press the highlighted arrow now. I think you are angry because Ole Bill won't sit down." And ain't mad at you! How in THE HELL can he even fix his mouth to say he's running again!! Money in the damn freezer?! Indicted kinfolks?!

You made an even more poignant point that I just could not ignore - "My only hope is that all of your opponents are not white. The reason for that is that black people in our area have this philosophy that even a crooked brother can’t do us as bad as a white dude. That’s misguided and damaging sometimes but it comes from years of living in this city and never communicating with one another."

Cliff...I don't know man, it seems the sole purpose for our doing better in this country is so that we can mimic the Burning House rather than transform it. I expected better, but that's on me. I'm so tired of hearing, "They did it, why can't we?" as if that makes it alright. Those of us who teach our children right from wrong when they're little, appear hyprocrites once they're grown because all around them they hear the adults saying shit children always say when parents ask "Why did you do that?" - "Because so-and-so did it."

My sons are grown now, but you have a little one. You have to decide now, which story you'll tell. My advice, though you didn't ask for it, make it as honest and real as you can. Don't be the hypocrite. Let her know how it really is and hope your foundation serves her when she's grown.

Though no indictments to date, here's a similar story to Jefferson's from my home state of SC involving House Majority Whip, Rep. James Clyburn: http://www.charleston.net/news/2008/jun/16/rep_clyburn_draws_fire_earmarks/