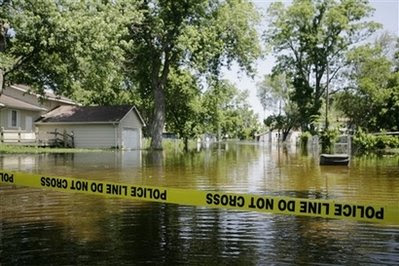 I don’t care what anyone says, water is the most fierce thing on this planet and when it decides to go places it wants to go we can’t do shit to stop it.

I know the rivers are rising and it’s flooding in the Midwest.

Thousands of people are losing their homes and all of their possessions.

I know that some of these people were led to believe the levees designed to protect them wouldn’t fail.

The water over topped more than 20 levees. I think the Corps of Engineers needs to switch to the metric system or outsource this stuff to India because they can’t build anything right.

I wanted to blog about it before now but every time I got ready I started thinking about our situation here and I got too angry. It’s been difficult to watch on the news because those folks are powerless without the proper protection. I want to give props to The Book for doing it first and making me write this. The good thing is that the rivers rose slow enough for most folks to get out of there in time. The lost of life makes recovery 100 times harder to deal with. You never look at the place the same again when it costs you a loved one.

I wish I had the time and the money to take off from work and go up there to help them lay sandbags. After the water levels go back to normal and the bags are no longer needed we can take the sand and throw it at the FEMA representatives who told some of those folks they didn’t need flood insurance anymore.

You know, while I have all the sympathy and empathy in the world for these people in the Midwest, I keep waiting for all the reporters and congressman to start suggesting that no one rebuilds in any of these towns like they told us not to do. Natural disasters helped along by the government can sure make you bitter.

My heart goes out to those people in Iowa because we have been there. There was a lady on the news the other day that was crying and saying that she lost everything. Mother Nature is hell. I can identify with everybody in Iowa. I will remember Katrina until the day I die. This is the hurricane that took lives (including your grandmother), separated families and took away everything people have worked for all there lives. I can identify with having to start over. Well, son, at least we have our lives and vacations to look forward to. It is rough and sad, but we have to go on for everyone concern. The government is not concerned with the loss of lives only what they can line their pockets with.
Mama.....

it's just sad all the way around...

but yeah, when i heard about the floods in the midwest i couldn't help but think about all the people in nola who are still living thru their katrina tragedies.

i couldn't help but wonder how this situation, these people will be handled by our gov'ment and how it will or won't contrast with how folk were treated after katrina. are still being treated...

i heard someone on the news say that people couldn't go back to their homes unless everything was disinfected.

some things can't be disinfected, i know. but i don't recall them saying anything about people returning to their homes after hurricane katrina.

my prayers are still with everyone.

A chill runs through my spine when I think of this.

"I keep waiting for all the reporters and congressman to start suggesting that no one rebuilds in any of these towns like they told us not to do."

As much as my heart truly goes out to them, I keep waiting to hear that, too.