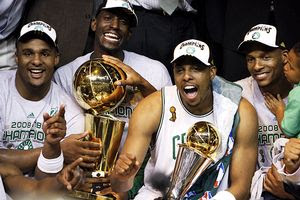 I know I am a few days late on this but I had to get over Kobe losing. I am happy for K.G. and Doc Rivers. I am glad Paul Pierce got to prove what he could do on the basketball court to a national audience. I have no problem with that at all but this was not supposed to happen. To me, Boston winning the title shows why so many people think the NBA is rigged. There is no way a team should be able to tank an entire season in order to get the number one pick, not get it, and still be able to make a trade for Kevin Garnett and win the title. It’s the same way the Lakers shouldn’t have been there either after trading for Pau Gasol. Would this happen in Milwaukee or New Orleans? This is why I predict the Knicks will make the finals in the next three years now that Isiah is gone. Cleveland will probably trade Lebron to New York for Stephan Marbury, two second round picks and a guy no one has ever heard of. David Stern needs to go ahead and make that same phone call he made to Minnesota and Memphis.

The Celtics through away an entire season on purpose but since it's Boston no one in the media seems to remember that. It's just like T.O and Pacman Jones being the anti-Christ until they went to Dallas. Now it's all good again. If the Saints would have traded for Pacman Jones every sportswriter in America would have went crazy.

I guess it could be like baseball where there are cities who know at the beginning of the year their teams aren't winning the championship.
Posted by Clifton at 6/21/2008 02:14:00 PM

If you or someone close to you is expecting and you’re planning on purchasing cribs or baby changing table you’ll want to start shopping several months before the due date. Currently, there are many beautiful, traditional style wooden cribs on the market. These baby cribs are sturdy and functional and can give your nursery a real sense of old-world charm. Most are built to accommodate adjustable mattress heights, have safety hardware and hand-and-knee releases. Some models also incorporate the addition of a teething rail on the drop-down sides and are also available in convertible styles. A convertible crib will grow with your child. When your child reaches toddler age, you can convert the crib into their first ‘real’ bed! That’s a great money-saving tip. Whichever crib design you choose, from traditional to contemporary, round, convertible or portable, you should be satisfied in knowing that you’ve chosen a safe, cozy retreat for your baby to dream their sweet, little dreams.