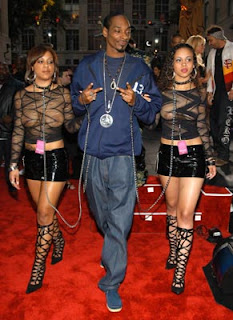 First of all let me say that I am a 32 year old black man who has Five Minutes of Funk by Whodini as his ring tone. I love hip hop. I still follow it like I did in my teens and I have not given up on the dream of making a mix tape one day after I get my flow right. I’m even listening to some right now as I write this. I would never speak on issues with the race and place the blame solely on the culture. That’s backwards to say anyway. Hip hop has always been built on the premise that the music reflects the world around it and not vice versa so how could it be the reason for what the community has become? I said all of that to take the focus off the fact that the following quote just happens to be from a rapper. I'm not picking on him or his music but he said it. It is what it is. The following quote comes from brother Snoop Dogg.

"[Rappers] are not talking about no collegiate basketball girls who have made it to the next level in education and sports. We're talking about ho's that's in the 'hood that ain't doing sh--, that's trying to get a n---a for his money. These are two separate things. First of all, we ain't no old-ass white men that sit up on MSNBC."
The question we need to ask is this……

Who's ready to protest on behalf of the " ho's that's in the 'hood that ain't doing sh--, that's trying to get a n---a for his money." ? Aren’t they not our sisters and worthy of the same outrage we gave that shock jock? How are they separate things? Who has been trained to detect the difference between a black woman and a "ho" by the naked eye? In regular clothes walking down the street, the Rutgers basketball team looks just like " ho's that's in the 'hood that ain't doing sh--, that's trying to get a n---a for his money" and every other black woman of their age group. I know there not and you might know that but does some white dude in Wyoming know that or some kids in Japan if we are promoting that? Is it ok to disrespect all black women that still live in the hood unless they go to college? If we are going to be valid in the statement that the aggression towards Imus was a part of a bigger movement then we have to start boycotting Snoop Dogg, his label and his sponsors tomorrow right? If not, all we did was take the easy victory over a weakened opponent. That’s just a quick adrenaline rush with no real effect on us as a people. I was having a conversation with a person I respect about this and she made a statement that maybe we probably aren’t fighting for the kind of sisters Snoop was talking about because if they were worth fighting for, they'd be fighting for themselves at least a little bit. What if they don’t know how to fight? Slaves were not in a position to fight but they had Frederick Douglass and other free blacks and abolitionists to help explain their plight. Black people in the south were segregated and under the thumb of Jim Crow. They didn't know how to fight but intelligent men and women of color stepped up when they didn’t have to and put their lives on the line for their behalf. Maybe if we fought for " ho's that's in the 'hood that ain't doing sh--, that's trying to get a n---a for his money." , they might not be “ho’s” anymore and people won’t think of disrespecting them or anyone that looks like them in public without any recourse no matter what they look like. If we eliminate all the "ho's" then there is no confusion. If someone reads this and thinks I am wrong please send me the instructions on how to look at two black women of the same age, style of dress and way of speaking and know which one's dignity is worth fighting for and which one isn’t. I’ve been living with black women my whole life and never knew it was ok to disrespect any of them.
Our generation is missing that sense of collective responsibility to one another. We lie to one another in our small circles about how the world sees us because the few of us have our act together. The truth of the matter is that at some point an intelligent black woman went somewhere without her business clothes on and a person in that place with no intimate knowledge of her culture other than the media looked at her and grouped her in with these girls walking around with Snoop on this leash. That's just how America works for us. Just to be fair, I don't go through my entire day without slipping here or there in regards to some of these issues but I also haven't made millions and traveled the world promoting my "culture" to the masses. There should be a double standard for anyone that has became wealthy from promoting the most destructive part of our community. If you don't want to be under the microscope, have Chuck D write your next album or stay home, get a real job and let someone else be the face of young black America.
Posted by Clifton at 4/14/2007 01:52:00 AM

Snoop and his ilk are the living embodiment of a double standard - they make a mint off of disrespecting black women and turn around and play the role of the persecuted when the O'Reillys of the world denounce them.

As you know, I just wrote about this topic. But, let me say this, as you've already suggested, Snoop Dogg ain't the root of all African-American evil. The primary reason why Snoop and his ilk have so much influence over our children is because they don't have any worthwhile role models. The black middle to upper class needs to get involved to affect change amongst the lower class and uneducated. Plain and simple.

And I hear the roar of the crowd...not adulation, but appreciation. I tell you all of the time, you have a voice and it should be heard visibly and audibly outside of the web.