The Lost of a Great Man 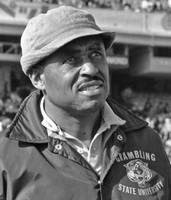 Let's forget the 408 wins and the 220 players that Coach Robinson sent to the NFL. A few years ago Nolan Richardson was dismissed as the coach of the University of Arkansas Razorbacks. He won a national championship for a big time Division One school. Out of all the players that entered the University of Arkansas from 1990-1994 none of them left with a degree. Eddie Robinson coached at Grambling for 57 years. He had an 80 percent graduation rate. That means that if you sent your child to play for him there was a good chance that he would at least be capable of being a respectable citizen. There are coaches like this all over America that get no press because the schools they coach for don't have TV contracts and play in BCS games. Coach Robinson was their standard bearer.
Rest In Peace Coach Robinson
Posted by Clifton at 4/05/2007 09:00:00 PM