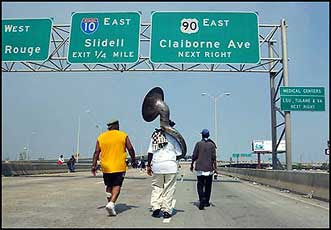 I had the pleasure of traveling to Memphis to visit my parents and watch my sister get married. It had been a long time since I left the metro area and the few days away was much needed. Out of selfishness I had been campaigning to my parents about coming back home. I keep making up these ideas in my own head about how miserable it must to be in Memphis so far away from home. I was worried that they would have trouble adjusting to a new place that they didn’t have any plans on ever moving to before the storm. The only thing close to a major city between New Orleans and Memphis is Jackson, Mississippi. Right after the storm I stayed in Clinton, Mississippi which is a suburb right outside of Jackson. I loved it. My parents live in a clean, quiet neighborhood in a big ass house on the outskirts of Memphis. There are stores, entertainment and resources all within 10 minutes of their house. There’s no national guard, no abandoned buildings everywhere, and they don’t have to ride 30 miles just to buy clothes. As I went through Jackson and Memphis I noticed that there were signs of development all over the place. Just going up I-55 you could tell that major things were taking place. Once I got off of the Twin Span and got into the city limits of New Orleans, all I saw was swamp, an abandoned amusement park, and a bunch of people trying to make it with what they have even though some sons a bitches in Baton Rouge are holding billions of dollars in aid that could get our shit back on track. How can I ask my family to give up that quality of life in Tennessee and go back to the Lower Ninth Ward now? I am not sure I will be able to sell that move in a few years if things here keep going the way they are. Maybe all the stuff I keep reading about that is being planned will actually start being done and I will have a positive report. Me and my family have this thing backwards. Instead of me worrying and trying to sell them on coming home, they should be worrying and trying to sell me on the idea of moving where they are. I can say this with certainty, life is definitely harder on all of us returning refugees than it is on the folks that haven’t come back. We are all just to confused and emotional about our city to admit that and leave again or stay away for good. I don’t know if I will ever leave without nature’s help again but I sure do miss those months of comfort when I was away from this bullshit everyday. I could deal with the all the flooded homes and missing activities. I just can’t deal with the stupid ass leadership and ignorant ass citizens that act like everything is ok. Oh well, at least we got the lakefront before dark(when it‘s not blocked off), the ability to buy liquor 24 hours a day and the choice of two strip clubs if you have some extra money. I guess that has to substitute for good schools, convenience and safety for awhile.

I am glad you got the chance to visit, that should have felt real good. I bet you did not want to leave them. Try not to wait a long time for the next one.