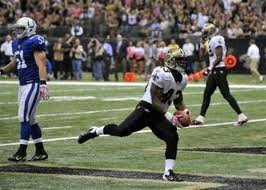 It’s Thursday evening and I think the Saints just scored again on the Colts......

We don’t need every game to come down to the wire. I had fun watching that 62-7 destruction! Towards the end I started feeling sorry for Reggie Wayne. He had 50 family and friends at the game and they had to sit through that. What’s even worse is that you know they had to go work Monday and hear it from all of their co-workers about what happened. The Colts scored 7 points and Reggie Wayne should have scored that touchdown.

This week we play the St. Louis Rams. That’s a team that has caused me much pain in my life especially in the old NFC West days when they were in Los Angeles. If one of the Saints happens to be reading this I just want them to know that it is perfectly okay to run up the score on the Rams. Why be satisfied with 62? 10 touchdowns is 70 points. I know we can do it. We have to win these games against inferior opponents because ever since Julio Jones got injured the Falcons remembered they had Michael Turner and are getting their act together.

I don’t watch a lot of baseball but I am rolling with the Texas Rangers because of Ron Washington and my extreme New Orleans bias.

Today my day started at 5:30 AM and ended at 7:32 PM. That's the time I finally sat down and turned on the game. My average day during the week is 12-14 hours. Adults have really long days. I guess kids have long days too but I never felt like the day was long when I was a kid. Days feel really long now. I think it's because adult life is full of things you hate doing but have to do...like ironing clothes.

If Hell exist and I mess up enough to make it there, the devil could really punish me by making me iron clothes for the rest of eternity. Extra punishment would be making me do it after waking up with an alarm clock with a broke snooze button. Double extra punishment would be having a Falcon's game playing non stop and I couldn't change the channel. Triple punishment would be Buffie the Body behind a glass door holding a cold beer while I am ironing and I wouldn't have a key to open the door. I'm going to have nightmares tonight. It's time for a vacation.

I’ve been checking out this Occupy movement going on around America. I think the whole movement is a teachable moment. I’m down with the cause and I support it but it’s interesting to look at the reaction of politicians to these movements compared to some of the rallies the Tea Party had. When the Tea Party was at it’s peak and had rallies being staged around the country politicians on both sides changed their agenda to match what they were saying. Like it or not they have a lot to do with the current political direction of the country. Some of these Occupy movements have had damn near riots and outside of the mayors in the city trying to control everything you haven’t heard much from elected officials. The 99% may represent a large cross section of the country but the 1% buys politicians. To change the system it’s going to take money. The power is in the PAC.

When did Mayor Bloomberg of New York and all these other business people become so concerned with who controls schools in Louisiana? What made him and his anonymous donors to his PAC suddenly become involved in the education of our children? If there was a grassroots candidate running for the BESE board seat in New Orleans and they could win because of money that didn’t come from anyone directly affected by their decisions, that person really doesn’t have to answer to the parents and citizens in that district. We wouldn’t control their marching orders. That’s why I won’t be voting for anyone that falls into this category. Sad to say that they’ll win it because they have the money and the muscle to drown out the other candidate. The power is in the PAC and there’s nothing we can do about it.

The Saints just scored on the Colts again.......

If you want to do something for the community and feel good about it. Click on this link and help some good people help the folks at the homeless encampment under the expressway near Oretha Castle Haley Boulevard. You don’t have to give any money if that makes you uncomfortable. You can call and ask what the folks need and buy it yourself if you want to. The people that are trying to find housing for the men and women in this camp are really good people and some of them are my friends. I’ll guarantee that they’ll do the right thing with whatever you decide to help out with.

I appreciate your recommendation for a way to help these homeless people and want you to know I do take you seriously and follow up on things like this.

Ron Washington is one excellent manager and deserves to win that World Series trophy.