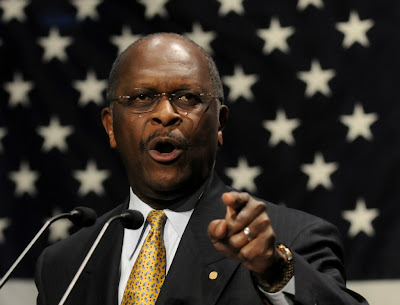 I’ve been trying to figure out the Herman Cain phenomenon. I’ve been watching his rise in popularity and I can’t quite figure out what I’m watching. Either the Republicans are just that unsatisfied with the so called front runners that he’s passed in the polls or he is a political genius. I’m fascinated by the whole thing. Personally speaking I would be so excited to see Herman Cain go against President Obama just to see how Black America dealt with all the issues that kind of debate would bring. It would also make real racists head explode. That election would change the country even more than Obama winning because Cain would be coming from a mind state that most black people aren't thought to have.

A lot of people in my community have already made their decision on Mr. Cain. I’ve heard him called a bunch of names and none of them are flattering. The most popular accusation is that he’s a sellout. Calling someone a sellout is something I reserve for the most extreme cases. I think we have to be careful when judging someone’s racial authenticity because those guidelines can change all the time and you never know when you might be called the same thing. Maybe Herman Cain’s life experiences led him to believe the things he does. Being conservative doesn’t mean he’s not as black as the rest of us. He has the right to believe in bad policy and still be black.

The only thing Herman Cain has done to bother me is to say that he doesn’t think there’s any racism holding people back these days. I’m actually not surprise he would say that because he’s a Republican and right now they believe there are no obstacles holding anyone back other than their own laziness. That’s why they think they can cut every program and wait for the private sector jobs to roll in so government won’t have to do anything. If you admit that there may be real barriers for people to prosper like racism then you might have to do something about it and they don’t want to do that.

Mr. Cain was also was a radio host. Talk radio shows, 24 hour news channels, and people looking to sensationalize things have turned the idea of racism into basic things like calling someone the N-word, saying nappy head hoes on a radio show or dressing like a slave for the office Halloween party. Those things are racist but we spend so much time and energy focused on those things that we don’t take the time to explain the deep rooted institutional racism that makes being successful a bigger challenge for Black America. There are obstacles that make things different. Even Herman said so in explaining his original statement.

“Are there some elements of racism? Yes. It gets back to if we don't grow this economy, that is a ripple effect for every economic level, and because blacks are more disproportionately unemployed, they get hit the worst when economic policies don't work. That's where it starts.”

Why are we more disproportionately unemployed? If there’s no racism or whatever he wants to call it to put us in that position, why do we get hit the worst when economic policies don’t work? If everything is equal and it’s all about hard work then the black unemployment rate should be the same as everyone else. There has to be something that caused that. If it’s not racism then give it another name but don’t pretend like there’s nothing involved. Deep down I think Herman Cain knows this but he can’t say it because he doesn’t want to sound like he’s being racist telling the truth. I don‘t question Herman Cain’s identity as a black man but I am worried about how far he would go to prove himself and the policies he might introduce. We are already catching hell with the president in office that we love. I have no desire to try and survive four years of a President Cain trying to prove his own personal reality is true for everyone else. Our community isn't ready for him to try and prove that theory to his supporters.
Posted by Clifton at 10/12/2011 09:25:00 PM

I suspect Cain is the latest in a string of "Not Romney's" The republican hoi poloi are not interested in another establishment candidate. So they bounce from one "not Romney" to the next. Not one caucus has been held, not one delegate elected, and the field is already thinning.

Claim faucet satoshis over at Easy Bitcoin Faucet. Up to 33 satoshis every 10 minutes.

Did you consider exchanging with the #1 Bitcoin exchange service: YoBit.