A Tough Lost and an Injured Coach 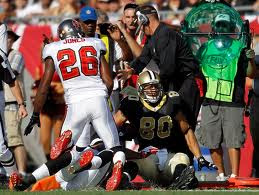 I was wrong about that one...

The worst part about today besides losing was Coach Sean Payton damn near getting his leg taken off by an accident on the sidelines. I really feel like the game took a weird turn after that and the Saints never recovered. I was right about Raheem Morris having Tampa fired up. I thought that wouldn’t bother the Saints and I was wrong.

I would rather lose three games to any other teams in the NFL than one divisional game. Those always suck more than the others.

We are still tied for the division lead. We’ll be ready for primetime next week.