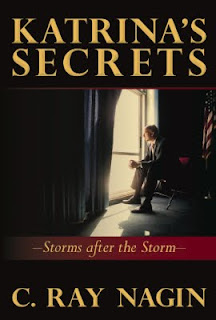 I was thinking about buying my former mayor Ray Nagin’s book. The title pulled me in. There are some secrets from Katrina that I wouldn’t mind knowing but I haven’t gotten the book because I don’t think they are in there. I have been checking out the excerpts from the book and all I see are things about the former Governor Blanco and Michael Brown. I know he has a lot of things in there about what it was like to be in charge of the city at the time of the storm and the pressure of that. I also think he probably has a few things in there that speak to the race and class divisions in our and are probably true but since he has such low creditably many are going to dismiss them as just Ray talking crazy. Unless you are in denial or just not paying attention many of those issues are obvious too so I don’t need to spend eighteen bucks on the mayor’s book just to fill me in on what I already know.
What I was hoping Ray Nagin would give me from his book was some of the things that we talk about behind close doors but don’t know for sure. I was hoping he could clear up some of the conspiracy theories. For instance, I would like to know who was in that meeting in Dallas when they talked to him about who was going to come back to the city. If that meeting really happened the mayor should name each and every person and what business they run. That way I could start boycotting those people now. It’s not too late for that. I would like to know was the Lower Ninth Ward really going to be cleared to build a resort? I never thought this one was true but if it is I would like to know who was going to invest in that.
I would like to know what exactly did the mayor agree to before the Bring Back New Orleans commission released their plan and got everyone riled up. There’s no way those folks made that plan public without thinking the mayor was going to put his stamp of approval on it. If I am right about that I would like to know who or what changed Mayor Nagin’s mind and made him keep the entire city open brought so much heat on himself. That would be some eye opening reading. Other than that I don’t want to read about any new Katrina stories that are just similar stories to the ones we already lived through ourselves. If Ray Nagin wants me to spend money on that book he needs to expose all the things that went on behind the scenes that the media didn’t cover. If he’s not doing that then I am spending that book money on gasoline to get to work.
Posted by Clifton at 6/22/2011 09:52:00 PM

Did you hear his interview with LBJ and Kelder? He mentioned some special ops teams forced their way into his hotel room and some rooms on another floor. He said that he concluded that they wanted to wire tap the rooms but didn't say how he came to that conclusion. He's doing a book signing today.

Ya' know some of these questions are never going to be answered because some of the exist only in the minds of some parts of the greater New Orleans community.

Some of the myths of Katrina will never be put to bed.