Hanging In The Heat With A Bunch of Bulldogs 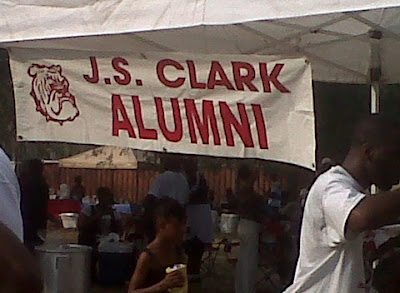 Yesterday I went to the J.S Clark alumni picnic. It felt like the temperature was 1000 degrees outside but everyone had a good time. I had been so tired from work that I didn’t want to go but my people talked me into it. I’m glad I did. It was a great turnout and I hope every school does the same thing with their alumni. It was cool seeing some folks I haven’t seen in years. I saw a lot of people I know from around the city that I had no idea went to the same school I did and I hadn’t seen any of them since Katrina.
I struggle with the conflict between the old New Orleans and the new one so many people seem to think we need. I go back and forth with how I feel about certain things like neighborhoods and schools. When I read about new ideas and plans for changes I always try to think of the right balance between progression and maintaining a sense of culture and community.
Many times I feel detached from a lot of things that make me who I am. Maybe it’s because I live in New Orleans East now and don’t spend as much time as I used to in my old stomping grounds. Maybe I have been beat down by news of violent crime and negative statistics that I mentally isolate myself just enough to not be associated with it. It could be that life is just too damn hectic these days to spend much time worrying about things like that and you have to keep pushing forward.
All of those things are true in some form or fashion but just like my friend who hasn’t lived in the city since we graduated and he went away to college said when we drove up to the picnic yesterday and he seen everyone out there; these are the kind of things that make you feel at home and happy. He was right about that. Sometimes when things get hectic you just need to spend some time with your people and reminisce about the people and places that got you to this point. It’s always refreshing to run into someone you came up with and be happy when they are doing okay. That’s what I saw out there on the Riverview yesterday and that’s the New Orleans that means the most to me. I hope we never lose that aspect because then the spirit of the city is dead no matter how nice the new buildings look.
Posted by Clifton at 6/05/2011 01:22:00 PM

I have a reunion this year...still trying to decide if I wanna go though. I'm glad you had a wonderful time. My parents are alums of Clark as well.